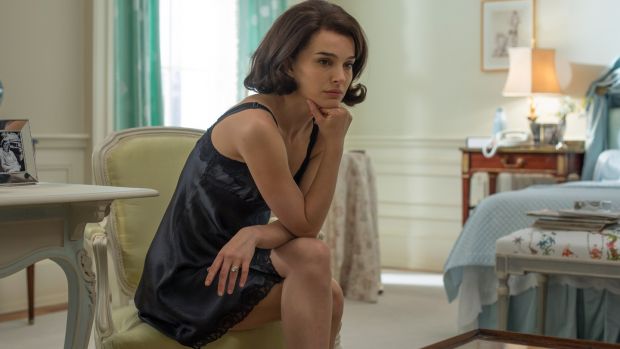 Ask not what Jackie can do for you. Ask what you can do for Jackie. None of the professionals attached to Pablo Larraín’s quietly nightmarish treatment of Jacqueline Kennedy’s widowhood lets themselves down.

Stéphane Fontaine’s Super 16 cinematography combines the texture of contemporaneous documentary footage with a gauzy otherness that expresses the torpor of grief. Natalie Portman is exemplary as the sad planet around which self-important satellites spin.

The most remarkable contribution comes, however, from the young English composer Mica Levi. Building on her work for Under the Skin, Levi decorates the film with lush sweeps and minimal refrains – a lonely flute is particularly effective – that occasionally suggest an orchestra tuning up.

This could hardly be more appropriate. Jackie is about an interregnum. It is not about the presidency. It is not about the first lady’s complicated afterlife. Larraín has made an incomparable film on the process of moving queasily into uncertainty. We are just getting started.

This is unusual territory. But Noah Oppenheim, who worked on the undistinguished The Maze Runner and the godawful Allegiant, brings comfortingly conventional tropes to his effective screenplay. He offers Mrs Kennedy three confessors – one literally so – in the form of Father Richard McSorley (John Hurt), the journalist Theodore H White (Billy Crudup) and a generously written Bobby Kennedy (Peter Sarsgaard).

We open with Jackie meeting White, who wrote a famous profile in Life magazine, just a week after the funeral. It quickly becomes clear that Jackie understands the need to shape impressions and has the wit and determination for the task. “I’m guessing you won’t allow me to write any of that,” White remarks on a moment of savage candour. “No. Because I never said that,” she replies.

Despite such acknowledgments of media-savvy, Jackie does not question the depth of its subject’s grief or the totality of her isolation. Once Jack is dead, the machinery of state begins inching her out the door. Bobby is the only person with real power who understands her need to stamp authority on the funeral arrangements. “More horses! More soldiers!” she shouts in a desperate attempt to regain control.

Larraín risks intrusiveness in his depiction of the first lady’s private despair. Her boozy stagger round the White House apartments to the original cast recording of Camelot could hardly be more theatrical. The shots of Portman showering the blood from her narrow shoulders invite the dread word “bravura”. But these sequences get at an inner truth that no lachrymose dialogue could manage.

None of this would matter without a functioning central performance. Portman is fearless in her efforts to wrestle an icon into submission. Those unfamiliar with the future Jackie O’s speaking voice may recoil at tortured vowels that now seem almost as strange as those that emerged from Truman Capote. Portman creates a rare, exotic beast that knows she’s facing imminent extinction.

Released here on the same day as the inauguration of a new US president, Larraín’s film -–written long before Trump seemed a plausible contender – will kick up unavoidable, accidental reminders of current discontents.

We are watching an elegant, relatively young couple, who welcomed artists such as Pablo Casals into their domain, make way for an older administration headed by a notorious political bruiser. Greta Gerwig and Richard E Grant are charming as Nancy Tuckerman and William Walton, two suave advisors who will find no place in the coming regime. The reliable John Carroll Lynch plays Lyndon Johnson as a bluff, unstoppable force of nature.

In truth, however, nothing about this interregnum looks much like the one that is just ending. Jackie can be a forbidding film. Delicate souls may wish to look away during the flashbacks to the assassination. A sense of desperation hangs over the action.

But the film-makers’ affection for the era is unmistakable. Perhaps the biggest artistic risk is to play Camelot at us without layering the relevant scene with any deflating irony. “There’s simply not a more congenial spot for happily-ever-aftering . . .” Richard Burton intones. Larraín half-believes him.