The official trailer for Fahrenheit 11/9, the latest documentary from filmmaker Michael Moore. 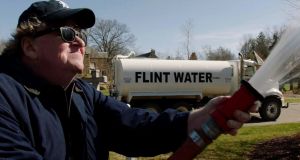 Michael Moore returns to his hometown of Flint and looks into the extraordinary capitalist banditry that led to the poisoning of the city’s water supply.

It seems as if we’ve been complaining about Michael Moore preaching to the converted since he turned up to pester Benedict Arnold for betraying the Revolution. He won’t find many more enthusiastically converted fans than those at the Toronto International Film Festival. Sure enough the crowd howled at the gags and gasped at the outrages in Moore’s characteristic response to the Trump ascendency.

You get everything you expect in Moore’s Fahrenheit 11/9. There are some hugely clever montages and some bitingly funny voiceover. The opening scenes, juxtaposing shots of Hillary’s presumed victory rally (smiling liberals hugging before the fall) and Trump’s presumed wake (sombre Wagnerian chords) are as amusing as anything he’s ever done.

You get some of his tiresome stunts. There is a suspicion that Moore’s heart isn’t really in it as he turns up at the Michigan State House to make a citizen’s arrest of Governor Rick Snyder. Happily, there is less of this guff than in earlier Moore joints.

You get some of his moving journalistic researches into the challenges facing ordinary Americans. He returns to his hometown of Flint and looks into the extraordinary capitalist banditry that led to the poisoning of the city’s water supply. He looks into the teachers’ strike in West Virginia. He lauds the impressive young people who refused to roll over after the Parkland shooting.

If this sounds just a little scattershot then that is indeed how it feels on screen. The opening suggests we are going to get a blackly comic takedown of the Trump regime. There is some of that in the bookends. But the main body of Fahrenheit 11/9 (the date refers to the day the election result was confirmed) is a survey of America as Moore sees it. The portrait is a bleak one, but it is energised by the director’s heartening belief in the resilience of the American citizen. There is hope here.

On first glance, you might be tempted to argue that no two films could offer a less likely double bill - that’s how I saw them - than Fahrenheit 11/9 and Brady Corbet’s superb Vox Lux. The young director and actor’s second feature stars Natalie Portman as troubled pop star trying to pull herself together before a big gig in her home city. It’s all flash and angst and EDM. But, like Fahrenheit 11/9, Vox Lux is in part a comment on American school shootings. In his baggy, flawed, but largely brilliant, debut Childhood of a Leader, the director showed that he was prepared to wear his directorial influences conspicuously (in that case Michael Haneke). Here the opening scenes appear to lean towards the work of Lars Von Trier. There is a brutal slaying in a Staten Island school. The film is shot in the cool, muddy Von Trier style. It even has a purposefully stilted voiceover from the Danish director’s frequent collaborator Willem Dafoe.

Those allusions are, however, kept very much on the surface. With just two features, Corbet has already established his own ironic, grandiose vision. Once again the immortal Scott Walker returns to offer a sweeping score that helps makes an epic nightmare of the New York where our protagonist ends up. Celeste (Portman) was one of the few survivors of the shooting. In the weeks after the tragedy, her musical tribute to the victims caught the national spirit and, with the help of manager Jude Law and sister Stacy Martin (star of Von Trier’s Nymphomania), she managed to develop a mainstream pop career. There were scandals. She has had drug problems. Now she’s back home and the world won’t leave her alone.

There are all kinds of reasons to look forward to Vox Lux. Sia’s songs are first rate. Law makes something fresh of the archetypically cynical pop manager. But it really is Portman’s show. Having great fun with a chewy Staten Island accent, she struts and flounces and decays with an angry fragility that would impress even the Garland/Minnelli axis. It is impossible not to think of Lady Gaga and, if US distributors Neon can get Academy Voters to see Vox Lux, there exists the very real possibility of Portman competing against Gaga in the race for the best actress Oscar. We’ll be reporting on her ladyship’s turn in A Star is Born at the weekend.

The Irish in Toronto

Irish films continued to premiere at another busy Tiff for domestic cinema. Chanya Button’s Vita and Virginia, co-produced by Dublin’s Blinder films and largely shot in the capital, is, for both good and ill, a very strange beast indeed. The film investigates the relationship between Virginia Woolf and Vita Sackville West that triggered scandal in inter-war London and led ultimately to the creation of Woolf’s Orlando. Nobody could deny that an effort has been made to nudge the film away from the cosy traditions of Sunday-night telly. We first see Woolf - given long vowels and a longer back by Elizabeth Debicki - curling sinuously to the sounds of an effective electronic score by Isobel Waller-Bridge (sister of Sophie). Would that Ken Russell were here to see it.

Unfortunately, the film, from a script by Dame Eileen Atkins, doesn’t quite deliver on that promise of truly radical shifts into the unknown. Button employs powerful effects to signal Woolf’s looming breakdown: vegetation eats its way into everything she sees; crows sweep down and engulf her. But too much of the film finds West (the always welcome Gemma Arterton) and Woolf intoning undigested lumps of their letters at one another. Still, Vita and Virginia, beautifully dressed and well spoken throughout, has undeniable camp appeal that may generate a following.

First Man: One giant leap for the cinema!

Are there any space clichés left to employ about Damien Chazelle’s First Man? Countdown to the Oscars begins here! It’s simply out of this world! You’ve already read these. After securing an Oscar nomination in Chazelle’s La La Land, Ryan Gosling returns to bring humanity and integrity to the role of Neil Armstrong in a film that really does find ways to be something other than The Right Stuff.

He’s the proper actor for a character who was known for his unknowability. Though cold-eyed and largely inanimate, Gosling does allow us some insight into the astronaut’s inner torment. In the opening moments, we learn that his daughter died of cancer and that trauma serves to offer perspective throughout.

Claire Foy has the good fortune to land a “wife role” that is more fleshed out than usual and she makes the most of Janet Armstrong’s apparent strength and intelligence.

Projected here on IMAX, First Man really drives home the sensory impact on the astronauts. The sound in particular is startling: cranks and creaks as if going to sea in a rusty tramp steamer. Justin Hurwitz’s score swirls, but never gives into sentimental gush. This is an irresistible hunk of heroic American film-making that will get Oscar-nominated up the kazoo.

We have ignition! One giant leap for the cinema! And so on.