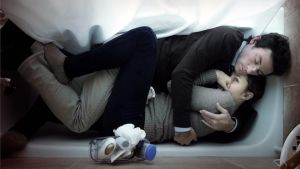 Making Steven Soderbergh seem like a slouch, Shane Carruth writes, directs, produces, edits, shoots and acts in this transcendent, delayed follow-up to his extraordinary time-travel puzzler Primer. He also composed the throbbing score and – in the US – actually distributed the blasted thing. All that stuff about film being a collaborative art is so much baloney. Is it not?

So, Upstream Colour can be seen as the vision of one stubborn artist. What a vision that is. Carruth is a mathematics graduate and Primer, released to acclaim in 2004, did look like the work of a man who valued logical rigour. Watch it a dozen times (10 if you have a PhD) and it becomes apparent that the interweaving plots – knotted by the characters’ ability to flit through time – can be unravelled to form unbroken lines.

On first glance, the new film appears to be taking a very different approach. We begin with another adventure in science-fictional speculation. A mysterious individual handles a class of parasite that, if introduced into the human body, acts on the host’s capacity for independent thought. The shady character surreptitiously slips one such grub onto Kris ( Seimetz), a production designer, and, while she is diverted by mindless pursuits, withdraws the contents of her bank account. So much, so lucid (if weird).

Half an hour later, however, the film appears to have totally given up to beautiful, side-swiping surrealism. Another strange man sucks the worms from Kris’s body and passes them onto his mistreated pigs. There is something odd going on with certain beautiful flowers. A good-looking fellow named Jeff (Carruth) meets Kris on a train and appears to make some sort of spiritual connection. Perhaps he was also a victim of the worm? They remember each others’ experiences. When the pigs suffer trauma, Kris and Jeff go through their own crises. What’s this? Now, they’re picking stones from the bottom of a swimming pool while muttering excerpts from Henry David Thoreau’s Walden.

It is certainly possible to enjoy Upstream Colour as an exercise in washed-out absurdity. Exploiting waves of electronic music, clinically bland Dallas locations and a palette skewed towards greys and blues, Carruth creates a universe that looks like a version of our present dreamt up by futurologists in the 1980s. We are in the real world and not in the real world. Every element snugly entwined with every other, the film ladles on obscure paranoia in a fashion that is properly disturbing throughout. Should you wish, you could even view Upstream Colour as a magnificent slab of video art: the sort of thing you might, while visiting a white-walled gallery, spend an indeterminate amount of time squinting at.

But it’s not that. The themes may be numerous and varied – concerns about drugs, surveillance, disease, alienation – but the story does have an impeccable (albeit deeply buried) logic to it. That’s to say if the viewer looks hard enough he or she will fit the pieces together into a lucid tale about faith, betrayal, despair and hope. Carruth has, somewhat surprisingly, compared his film to Alan J Pakula’s All the President’s Men. Both films offer more information than the average viewer could comfortably consume in one sitting. Both greatly repay any effort invested.

Carruth’s greatest achievement is to compose a work that appeals even as it frustrates early efforts to connect the quarrelling narratives. It exhibits great formal beauty and permits real emotional connections between its frightened principals. Then, at the end of it all, this puzzling, cool, distanced film actually dares to argue for
old-fashioned virtues such as kindness, honesty and sympathy.

Where will this man go next?