John Boyega says Star Wars has a problem with actors of colour. Is he right?

The London actor, who found fame as stormtrooper Finn, criticised how Disney treated non-white characters in the franchise 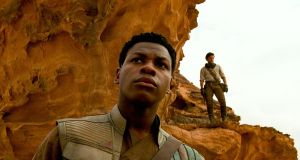 Actors John Boyega as Finn and Oscar Isaac as Poe Dameron in Star Wars: The Rise of Skywalker.

John Boyega, the South London actor who found fame as stormtrooper Finn in the most recent Star Wars trilogy, has spoken out frankly about the franchise’s attitude to actors of colour. Back in 2014, when Boyega appeared in the opening frame of the first trailer for The Force Awakens, it looked as if the filmmakers were making a statement about inclusivity. The character did, indeed, feature prominently in the film itself, but, as the trilogy progressed, Boyega felt that his role was steadily downgraded. Speaking to GQ magazine, the actor, whose parents are of Nigerian origin, directed the blame at the series’ corporate overlords.

“What I would say to Disney is do not bring out a black character, market them to be much more important in the franchise than they are, and then have them pushed to the side. It’s not good. I’ll say it straight up,” he said.

He went on to point out how the story ended up revolving around white characters: Daisy Ridley as the resourceful Rey; Adam Driver as the sinister Kylo Ren.

The case of Kelly Marie Tran is worth highlighting. The Asian-American actor had a popular role as Rose Tico, Finn’s possibly love-sick sidekick, in The Last Jedi, sequel to The Force Awakens, but, whereas Boyega had a busy subplot in the succeeding The Rise of Skywalker, she was barely visible in that closing film. Many fans felt cheated. Then again, The Rise of Skywalker was so insanely muddled it is hard to draw any rational conclusions about the filmmakers’ intentions. The thing was a clatter of disconnected incident.

“What do you want me to say?” Boyega told GQ. “What they want you to say is, ‘I enjoyed being a part of it. It was a great experience ...’ Nah, nah, nah. I’ll take that deal when it’s a great experience. They gave all the nuance to Adam Driver, all the nuance to Daisy Ridley. Let’s be honest. Daisy knows this. Adam knows this. Everybody knows. I’m not exposing anything.”

The argument over representation in the recent Star Wars films has swung both ways. Following the release of Rian Johnson’s The Last Jedi, a toxic corner of fandom took arms against the franchise for its supposed “PC” favouring of female characters and people of colour. The waves of abuse drove both Daisy Ridley and Kelly Marie Tran off social media. A semi-serious Twitter account called Remake the Last Jedi argued for a new version of the film. The lunatic fringe objected to Laura Dern wearing purple hair — a supposed “Social Justice Warrior” trait — as a commander in The Rise of Skywalker (wags pointed out that another Star Wars general was a giant fish). “This is anti-male propaganda poorly disguised as a Star Wars movie,” a reviewer of The Last Jedi on Amazon babbles. “Liberal identity politics has ruined Star Wars for the fanboys,” the Daily Telegraph suggested in 2017. A subsequent report suggested “Russian trolls” were exploiting the debate to “propagate political messages supporting extreme right-wing causes and the discrimination of gender, race or sexuality”. The noise still echoed.

Boyega’s statements will almost certainly do nothing to quell that orchestrated outrage, but the coverage will press home how much work has still to be done in maintaining diversity. This comes in the wake of an equally brave interview by fellow black British actor Thandie Newton. The star of Westworld was not afraid to name names when describing how she was patronised within the industry. She was disarmingly frank about how sexual abuse against people of colour is tolerated. “If you’re a young black girl and you get raped, in the film business, no one’s going to f**king care,” she said.

There was a time when such bluntness could destroy an actor. But movements such as #MeToo and this summer’s Black Lives Matter resurgence have put studios under pressure to heed such testimony. Boyega had already staked his claim with a stirring speech on Black Lives Matter in June at Hyde Park. “I’m speaking to you from my heart. Look, I don’t know if I’m going to have a career after this, but f**k that,” he said then. Next up he plays a police officer fighting to change the force in an episode of Steve McQueen’s anthology series Small Axe. He cannot be ignored. He will have a career.

“For me I never worried,” he told me in 2018. “I have this opportunity. How do I expand on this? How do I make the best of these moments?”