While there are typically bleak comic diversions, there's an atmosphere of surreal gloom that is very much Kaufman’s own 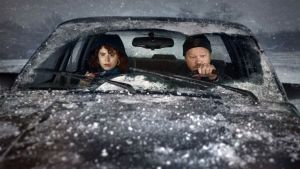 It is a little over a decade since Charlie Kaufman dared to unleash a film with “synecdoche” in the title. That word is forever at one’s elbow throughout his extraordinary, frustrating, brilliant, depressing, daring (and surprisingly faithful) adaptation of a philosophical novel by Iain Reid.

Pedants may bristle. It is not so much that small parts are intended to represent the entire work; the way in which scenes, themes and phrases summarise the film’s wider purpose – and Kaufman’s whole career – is surely accidental.

(Then again, is anything accidental here? Given the excellent performances Kaufman gets from Jesse Plemons and Jessie Buckley, we can safely assume that their congruent forenames had no influence on casting – indeed, Brie Larson was originally down for the female lead – but Kaufman is almost certainly delighted that homophonic actors ended up playing romantic partners shuffling identities.)

“It’s good to remind yourself the world’s larger than the inside of your head,” Jake (Plemons) says as he and his erratically identified partner drive through a midwestern limbo. The most recent Kaufman films have, to some extent, been about the appalling truth that there is nothing else to life bar the contents of our own heads. That is the human predicament.

Later, the woman who goes by various names (Buckley) – and may study anything from physics to sociology – argues with Jake about the worth of John Cassavetes’ A Woman Under the Influence. Anyone half-familiar with Pauline Kael’s writing in the New Yorker will twig that the dialogue is taken verbatim from her review of that film. “This two-hour-and-thirty-five-minute film leaves you too groggy to do more than moan,” she says.

Well, I’m Thinking of Ending Things is 20 minutes shorter, but even the most fervent Kaufman enthusiast may need to slap themselves back into full consciousness after the often-unforgiving picture judders to a halt.

Then there are those words on the poster. Though it is drawn from Reid’s novel, one can scarcely imagine a better title for a Kaufman joint than I’m Thinking of Ending Things. The young woman says this in voiceover as she and Jake drive for a first meeting with his parents. We take this to mean she is considering a break-up, but, as the existential gloom gathers, the suggestion of suicide firms in the brain.

Think also of the presumed narrator’s efforts to wind up the shaggy dog story. The “ending” really could come at any point.

The long opening duologue plays out in something like the rational world. When, however, the couple arrives at Jake’s family home, time and everyday causality lose their bearings.

The uncomfortable visit to an isolated property inhabited by weird relatives is the stuff of Harold Pinter, Samuel Beckett and Edward Albee, but the atmosphere of surreal gloom here is very much Kaufman’s own.

Toni Collette (scatty, harassed) and David Thewlis (“no-nonsense” northern English) offer queasily disturbing performances as the parents. The actors initially seem to be playing slightly above their current age. Then they are younger. Then they are much older. “We don’t move through time. Time moves through us,” someone says, echoing current quantum physical thinking.

The narrative is occasionally so obtuse that frustration sets in. We seem to be hearing from a collective consciousness drifting through a compendium of bleak comic diversions. Here is a parody (cheekily attributed to a well-known director) on a school of a romantic comedy that doesn’t really exist. Here is a beautifully choreographed dance number. And so on.

Yet the director’s firm grasp on his own unique aesthetic keeps hauling us back to somewhere like solid ground. I’m Thinking of Ending Things ultimately takes on the quality of a profoundly unsettlingly nihilistic horror film. The fear comes from our impotence in the face of the void.

The film is shot in enveloping dampness that yields only discrete corners of illumination to firelight or glistening foodstuff. Jay Wadley’s excellent score adds lushness to the confusion.

Jessie Buckley’s determination to stop her slippery part from wriggling out of her clutch is positively heroic. The Kerry actor becomes Everywoman and Nobody. Her sorrow is bottomless. Her uncertainty is painful. One can imagine no better guide through these mysterious swamps.

Available on Netflix from September 4th