Review: Nobody will be enormously surprised by how the story plays itself out 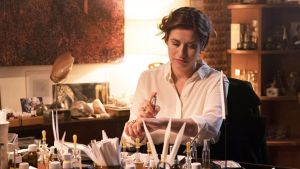 Francophiles have, for decades, been arguing that their favourite nation produces the sort of films Hollywood doesn’t make any more. That might now be true. Something a little like a romantic comedy (though it’s not quite that), Grégory Magne’s enchanting feature would, in an earlier age, have been hastily snapped up for a US remake with, say, Tom Hanks and Michelle Pfeiffer.

They won’t be wasting their time now. They really do leave this sort of gentle, mainstream entertainment to the French.

We start in Kramer vs Kramer territory. Grégory Montel, familiar as the hapless Gabriel in the Netflix hit Call My Agent, plays Guillaume, a professional chauffeur trying to gain custody of his daughter after a recent divorce. The lawyers are unconvinced he can cope in a tiny flat, but he has, at least, landed a halfway decent new job driving for the haughty Anne Walberg (Emmanuelle Devos).

It transpires she is a perfumier of some genius who, after a professional breakdown, is now just about making do as a freelancer. She is (ahem) sniffy about Guillaume’s more malodorous habits – flinging his cigs out the window before he has had even a puff – and unforgiving in her attempts to extend his brief. He is expected to carry her bags and change her sheets. Nothing is good enough for her.

Does their hatred become ever more vehement on the way to a violent parting of ways? Oh, come along. You’ve seen films before. After a few ups and downs, they end up forming a successful – if still flinty – professional partnership. She teaches him how to use his nose. He teaches her how to make the best of herself.

Much fun is had with the intricacies of the perfume business. We learn how to wash out the nasal passages. We learn something about olfactory psychology. What really sets Perfumes apart, however, is the creative friction between two excellent actors. As fans of Call My Agent will attest, Montel is perfect at frazzle-haired confusion and sat-upon pathos. An ornament of her industry for 25 years, Devos once again shows an ability to work fragility in with domineering standoffishness. The two work together like a dream.

Nobody will be enormously surprised by how the story plays itself out. But everyone involved sings the old songs with committed gusto.