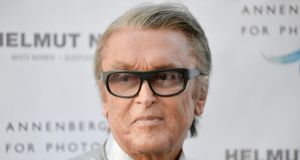 A women’s trousers salesman comes to Hollywood and jumps into the pool at the Beverly Hills Hotel, drawing the attention of an A-list actress. With her help, he begins an acting career, which leads straight away to the top job at Paramount Pictures. He helps deliver masterworks like The Godfather and Chinatown. A cocaine blizzard, legal spats and financial ruin come next. In the final reel, a comeback.

If a screenwriter had invented Robert Evans, the script would have been tossed on the rejection pile as too tall a tale. But Evans, who died on Saturday at his home in Beverly Hills, California, was living proof that, at least in Hollywood, truth can still be stranger than fiction. In a world full of big lives he lived one of the biggest: boardroom fights, tabloid romances, tennis with Henry Kissinger, even a murder trial.

Evans was 89. His death was confirmed on Monday by a family spokeswoman, who gave no other details. His colourful, twisty life made him a show business legend – Dustin Hoffman parodied him in the 1997 comedic drama Wag the Dog – but his biggest contribution to the movie industry paradoxically involved substance over style. When Evans took Paramount’s reins in 1966, Hollywood was in creative decline, relying heavily on established stars and safely sellable scripts. Evans helped rewrite the formula for a time by championing young writers and directors with striking cinematic voices.

“We didn’t strive for commercial,” he told Variety in 2002, undoubtedly in his trademark gurgle-mumble. “We went for original. We fell on our asses on some of them, but we also touched magic.” It’s how the world got Roman Polanski’s Rosemary’s Baby, Francis Ford Coppola’s Godfather series and Sidney Lumet’s Serpico, among others – films that have had an outsize impact on many of the writers, directors, actors, agents and studio executives that have come along since.

Evans was sometimes accused of overstepping his role. In particular, Coppola bitterly complained that Evans had needlessly meddled in the editing of The Godfather. (It was the opposite, according to Peter Bart, who was vice president of production at Paramount in those years. As Bart wrote of the supposed meddling in the foreword to Evans’ 1994 memoir, “I watched as a superbly shot but ineptly put together film was transformed into a masterpiece.”)

Evans, with his bolo ties and burnt-bacon tan, served as a bridge between old and new Hollywood. When he arrived in 1956, the film industry was still run by its magisterial founders – people like Darryl F. Zanuck, who, when Ernest Hemingway objected to the casting of Evans as the bullfighter in The Sun Also Rises, barked a response that became famous: “The kid stays in the picture.” Evans borrowed the line as the title for his memoir, which led to a popular documentary of the same name.

But corporate interlopers soon started buying up chunks of Hollywood. It was one such company, Gulf + Western, that catapulted Evans into moviedom’s highest ranks. After realising in the late 1950s that he lacked the acting talent to become a true star, he took some time off before turning to producing. But before he could make a single film, Gulf + Western hired him in 1966 to run production at Paramount, which was a new acquisition.

By the mid-1970s Evans had delivered hits like Love Story, Harold and Maude, and True Grit and was nominated for an Oscar for producing Chinatown. He hobnobbed with statesmen; Kissinger was by his side at the 1972 premiere of The Godfather. But he was also a raging cocaine addict. As detailed in his memoir, addiction took over his life, a foreshadowing of the drug hangover that would sweep Hollywood by the end of the 1980s.

In recent years Evans, off drugs but diminished by a series of strokes, became a Gatsbyesque hero to young writers, directors and actors feeling constricted by the heavily corporatised studio business. They flocked to his Woodland Drive home to touch a romanticised piece of Hollywood that no longer exists – watching movies in his private screening room, drinking watermelon juice squeezed by his butler and chatting with him as he stayed snuggled in bed. (The spread was made of mink.)

Robert Evans was born Robert J. Shapera on June 29, 1930, in Manhattan to Archie and Florence (Krasne) Shapera. His father, who took on the name Evans when Robert was young, according to The Kid Stays in the Picture, was a dentist; his mother was a homemaker.

After graduating from high school, Robert made his first professional stop in radio. Possessing a clear, deep voice as a teenager and demonstrating a knack for foreign accents, he booked, by his estimation, more than 300 radio shows before he turned 18, including a leading part on the popular comedy The Aldrich Family.

But after graduating from high school in New York he joined Evan-Picone, a successful women’s clothing company co-founded by his older brother Charles. It was on a sales trip to Beverly Hills that Evans, lounging poolside, caught the actress Norma Shearer’s eye. She thought he would be perfect to play her deceased husband (producer Irving Thalberg) in a forthcoming drama, Man of a Thousand Faces.

From there, Evans climbed relatively unabated in Hollywood, where he was mentored by the likes of Sidney Korshak, a Los Angeles labour lawyer and reputed fixer for the Chicago mob. The music stopped in 1980, when Evans pleaded guilty to cocaine possession, along with his brother, Charles, and his brother-in-law, Michael Shure. Then came The Cotton Club. Evans was producing the film, a crime drama directed by Coppola, in 1983 when one of its investors, Roy Radin, was murdered. Evans was never charged with a crime – one of his former girlfriends and three of her associates were eventually convicted in the case – but he emerged a Hollywood pariah.

“I had 10 years of a horrific life, Kafkaesque,” he told the New York Times in 1993. “There were nights I cried myself to sleep.” Time, sobriety and the memoir healed his reputation, and Evans returned to producing, retaining a bit of his colorful style. (He retained all of his love for cashmere.) Evans’ last movie as a full producer, the 2003 romantic comedy How to Lose a Guy in 10 Days, was a success, taking in about $251 million (€227 million) worldwide in today’s dollars.

Evans was married and divorced seven times. His survivors include a son, Josh, from his brief marriage to actress Ali MacGraw, who became a star in Love Story. He is also survived by a sister, Alice Shure. If nothing else, Evans was an ace at personal mythmaking. A favoured trick was tossing off dramatic dictums. “I’ve always been a gambler,” he abruptly told this reporter in 2016, even though the conversation was not about him. “Craps. Poker. Pictures.” – New York Times