Jeremy Irons on #MeToo: ‘I don't think censorship is a good idea’

The 69-year-old award winning actor on #MeToo, longevity, life without social media, and that now-infamous photocall with his ‘Red Sparrow’ co-star Jennifer Lawrence 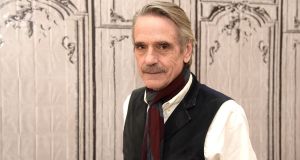 Jeremy Irons leans roguishly out the window of one of London’s swishest hotels and drags on his cigarillo. Aged 69, he’s the best-preserved 51-year-old in the business.

“Which dress?” he asks in his characteristically chocolate brogue. “The one with the split up the side?”

This is an important detail. As of this morning, the Oscar, Bafta and Tony-winning veteran actor – the Triple Crown! – has become unwittingly embroiled in a minor sartorial scandal. He’s done plenty of tentpole movies before, notably the recent Batman sequence (“At least I never had to do green screen,” he says). He has even voiced Moe’s bar rag in The Simpsons. But this is a much bigger deal.

That dress. That freezing rooftop photocall.

This is a news story.

The decision by his Red Sparrow co-star Jennifer Lawrence to wear a skimpy Versace frock among her more appropriately attired male co-stars, including Irons, has not gone down well with social media or the press.

(For the record, it’s two-jumper-minimum weather in London.)

The outfit in question, a reboot of the safety-pin dress once worn by Elizabeth Hurley, has been widely dismissed as a depressing symbol of Hollywood inequality, nestling, as it was, among the cosy scarves and jackets favoured by Red Sparrow’s male contingent.

And worse, it appears to be the moment when lovable goofball Jennifer Lawrence has jumped the shark in the court of public opinion.

“It is curious that we were all there in coats and that Jen was letting it all hang out, as it were,” muses a bemused Irons. “The dress is an interesting choice in the current climate. She obviously doesn’t give a monkeys, which is very much Jennifer. She’s her own woman. I think to be a young actress today, you have to be. There’s a larger discussion: how can you play somebody who is sexually open at a moment when all these Hollywood scandals and Me Too and all the Weinstein stuff is happening in the background? You might also ask: how can you make very violent shoot-up movies when schools are being decimated by shooters? I don’t think censorship is a good idea at all. It would be horrible to go back to all that. It’s difficult. I’m not quite sure what the answer is. But, well, it’s Jen’s choice.”

This, one soon realises, is how Jeremy Irons rolls. He mulls things over. He thinks out loud. It’s a tendency that has landed him in hot water once or twice. Or maybe more often than that. During a 2013 HuffPost Live broadcast, when he wondered if interfamilial unions might be possible under same-sex marriage legislation, the internet seemed to implode. In other interviews he has described abortion as a sin and has claimed that he would turn down a knighthood. He doesn’t do social media. That is probably just as well.

“There’s a lady in the middle of Texas who voluntarily does my website, and who is fantastic,” he says. “I’m a dinosaur. I have nothing to do with it. So I ignore reactions to things that I’ve said in the past. I find that way is the best way to deal with it.”

Director Francis Lawrence, who previously presided over the Hunger Games movies, has characterised the cast as his “first choices”. It’s a sort of reunion, too. Hinds and Irons are old chums, or more accurately old chums-in-law, through Irons’s wife, the actor Sinéad Cusack.

“We call Ciarán my wife’s second husband because they’re always working together,” says Irons.  “And I love him. I went to see him the other day in Girl from the North Country. What an evening that is.”

I need a bit of Celt, because I’m mostly Anglo-Saxon and a bit dry. So when I met Sinéad I thought: oh yes

Later this month, Irons and Cusack will celebrate their 40th wedding anniversary. They have two children, Sam, a photographer, and Max, who is also an actor. The couple live between Oxfordshire, Dublin and their famously pink castle near Ballydehob in Co Cork. It’s as impressively settled as their profession can be. Unsurprisingly, he’s a big fan of the institution.

“The secret is to take marriage one day at a time,” says Irons. “I’ve also been very, very lucky with my choice of wife. She’s an extraordinary woman. I remember a friend of mine – David Barry, the captain of the rugby team I played for – married an Irish girl. And I met her and I remember thinking: that’s what I need in my life, I need a bit of Celt, because I’m mostly Anglo-Saxon and a bit dry. So when I met Sinéad I thought: oh yes. I’m a great believer in commitment and longevity. I’m a gardener. I know things take time. There are droughts and there are deluges. But gradually, the thing you planted adapts and gets stronger. I see marriage like that.”

Does it help that they are both actors?

“Oh. A huge amount! She’s an enormous support. I’m just doing Long Day’s Journey into Night, and it’s a mountain. Both as a play and doing the part of Tyrone. The last play I did was years ago. And it’s like you’ve been pottering around and then somebody hands you a pole and says: now get over the bar. I can’t imagine being able to do that if I was married to someone who didn’t understand the process.Apart from anything else, there’s a huge amount of lines to learn. She’s immensely helpful there. But also in making sure I’m eating properly. She gets me match fit. I owe so much to her.”

Many of Jeremy John Irons’s best-loved performances are most definitely upper class. Even his most recognised American roles – his peerless turn as the gynaecologist twins in Dead Ringers, his Oscar-winning interpretation of Claus von Bülow in Reversal of Fortune – tend to err on the patrician side. And yet he was not, as he notes, to the manor born.

“It’s because I talk like I talk. And I’m tall and slim, I suppose. But really I’m a sort of gypsy. I’m not even middle class. Although I was brought up middle class. My father was a chartered accountant. I went to the right schools. I grew up around people who, because they were part of the aspiring middle class, never got to do what they wanted to do. But I was a second son. So that helped.”

When, as a second son, he first considered acting, he didn’t really enjoy it, but he did enjoy what it represented: a societal freedom befitting the great-great-grandson of a Metropolitan policeman who became a Chartist.

“Actors were classed as rogues and vagabonds,” he says. “They weren’t allowed to vote for the longest time. When I came to the end of my schooldays and had to think about what I wanted to do, I knew I wanted to play around the edge. I didn’t want the millstone of a career. I liked acting not because I liked acting, but because I liked the life. I thought about the fairground and I thought about the circus. I liked the idea of a unit that travelled around together from town to town, having a sort of society outside society.”

He insists he’s still a vagabond and a rogue. On his way to those fateful promotional duties for Red Sparrow, there was a good deal of dilly-dallying. Might things have been different? Might dress-gate have been avoided in a speedier parallel universe?

“I ride a motorbike because I can’t bear the traffic,” he explains. “I don’t want to be stuck in a car in traffic or waiting for the Tube. I just did a journey in a car for 50 minutes that would have taken me 15 on the bike. So that’s always been my attitude to life. Don’t do harm to anyone. See what the problems are. And get past them quickly.”

Red Sparrow is on general release

The Mission (Roland Joffé, 1986)
During the 18th century, two Jesuit priests (Jeremy Irons and Robert De Niro) journey to the Argentinian jungle to convert a Guaraní community to Christianity.

The Lion King (Roger Allers, Rob Minkoff, 1994)
Chiwetel Ejiofor has some big shoes to fill as the resentful non-heir to the throne in Jon Favreau’s incoming 2019 live action version.

Loosely based on based on the shocking deaths of doctors Stewart and Cyril Marcus, Dead Ringers is an endlessly fascinating cervical horror, bolstered by Irons’s remarkable dual performances.

Margin Call (JC Chandor, 2011)
The CEO of an unnamed investment bank attempts to dump all of his company’s toxic assets before others realise they are worthless.