It’s already at the half-way mark, but don’t miss the chance to see these excellent films before closing night on Sunday 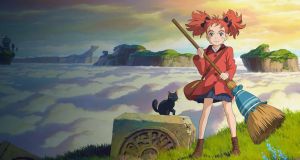 Mary and the Witch’s Flower: A delightful adaptation of Mary Stewart’s 'The Little Broomstick'

First, the bad news. If you’re coming late to the Audi Dublin International Film Festival (ADIFF) party then you have, alas, missed out on such terrific titles as Beast, Sweet Country, The Lonely Battle of Thomas Reid, The Line, and The Divine Order. Good Favour, Kissing Candice and most of the remaining Irish premieres are already sold out.

Tickets for big hitters such as Isle of Dogs, You Were Never Really Here and Mary Magdalene, Garth Davis’ appositely reverential passion picture (with stars Rooney Mara and Joaquin Phoenix in attendance), are going fast. Seats at Donal Foreman’s wonderful Oedipal essay, The Image You Missed, are extremely limited.

Andrew Haigh, the British filmmaker behind such beautifully observed relationship dramas as Weekend and 45 Years, changes continents and direction with this wonderful contemporary reworking of Huckleberry Finn, in which kind-hearted orphan Charlie (the always remarkable Charlie Plummer) goes on the run with a failed racehorse.

Xavier Legrand’s white-knuckle domestic thriller – an expansion of his 2013 Oscar-nominated short, Just Before Losing Everything – opens with a hearing. A mother’s legal rep requests full custody as her two children no longer wish to see their violent, abusive father. In the absence of any hard evidence, the magistrate awards joint custody, a decision that has escalating and terrifying implications for 12-year-old Julien and his mother.

The prolific Hirokazu Kore-eda takes a break from wistful family drama for this fascinating legal drama, concerning a cynical lawyer, a vulnerable teenage girl and a murderer who keeps changes his confession story. Can the defence team piece together a narrative that will allow their unreliable client to avoid the death penalty?

Mary and the Witch’s Flower

Studio Ghibli co-founder and Oscar-nominee Yoshiaki Nishimura (The Tale of Princess Kaguya) founded breakaway Studio Ponoc in 2015. There are welcome shades of Howl’s Moving Castle and Arrietty about this delightful adaptation of Mary Stewart’s The Little Broomstick. Ponoc’s first feature film – a box-office smash in Japan last year – is certain to please those waiting the return of anime master Hayao Miyazaki.

In a year when casting directors moved closer to getting their own Oscar category, Casting – arguably the best film about casting ever made – is a comedy concerning an ill-advised remake of Fassbinder’s The Bitter Tears of Petra von Kant, as presided over by a dithering director. Meanwhile, a scheming actor is working his way up the cast list. Casting proves king.

Spiteful, middle-aged Inga already dislikes her neighbour, a younger, fitter wife (“the bicycling bitch”, as she has it). The Reykjavik suburbanites are already bickering about the large tree that casts a shadow over the garden next door when a missing cat fires up the feud. This deliriously dark comedy about warring Icelandic neighbours just keeps getting nastier. Sit tight for the final, gobsmacking escalation.

Working from Derf Backderf’s autobiographical graphic novel, writer-director Marc Meyers has fashioned a desperately sad portrait of Jeffrey Dahmer as “the loneliest kid” at high school. Disney Channel star Ross Lynch is both chilling and heartbreaking as the social misfit who grows up to be a serial killer.

Have a Nice Day

Xiao Zhang is a young driver working for a gang, who steals a bag of money from a crime boss so his girlfriend can correct her botched plastic surgery. Double-crosses, chaos and bloodshed ensues. Liu Jian’s cool indie anime recalls Tarantino’s earlier, funnier ones.

Lucrecia Martel is one of the most exciting, unpredictable voices in cinema and Zama – an adaptation of wildly acclaimed Antonio di Benedetto’s book that was nine years in the making and almost killed the director – is her most exciting and unpredictable film. Maddeningly close shots mirror the Kafka-esque plight of the titular protagonist, an 18th century corregidor in a far-flung colony. Watch as his requests for a transfer to civilisation are refused while an insubordinate is punished with a transfer to Zama’s desired destination. A llama skulks behind the deliberations.

So Help Me God

The hands-down best documentary (and possibly best film) in the festival is a wildly enjoyable portrait of a no-nonsense, rat-keeping Belgian judge, whose nonchalant attitude to the goriest crimes is matched by a determination that allows her to put the sketchiest villains in their place. A disturbing cold case adds another compelling dimension.