€9.5m build went over time and budget after original contractor went into liquidation 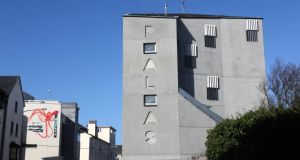 A side view of the new Palas Cinema behind the Galway City Mueum. Photograph: Joe O'Shaughnessy. 21/2/2018

Galway's long-awaited art-house cinema, named Pálás, is due to open its doors on Friday with the screening of several Oscar-nominated films.

Bookings have already opened, and some might say the project is worthy of its own edge-of-seat cinema production, due to the series of unfortunate events that beset it. However, even its critics welcome the fact that it is now complete.

Oscar-nominated films Lady Bird, with Irish actress Saoirse Ronan, Guillermo del Toro’s The Shape of Water and I, Tonya, starring Margot Robbie, have been scheduled for the opening programme, and the cinema’s restaurant promises “seasonal, colourful and hearty” dishes throughout the weekend.

Management of the €9.5 million project, originally estimated at €5.2 million, was transferred to Element Pictures, in late 2016.

Spearheaded by Solas-Galway Picture Palace Teo from 2004, the project had been hit with delays and cost overruns, including receivership and liquidation of the initial contractor. It required a further injection of State funds, and lack of oversight at an early stage was highlighted by the Comptroller and Auditor General.

However, Element Pictures was keen to pay tribute to the “passion and commitment and collaboration” of Lelia Doolan and her colleagues in Solas when it heralded the opening at a press briefing on Wednesday.

Fitted out with a series of 22 Patrick Scott stained glass windows which Doolan donated, the five-storey building houses three screens, a bar and restaurant.

It was built in the garden of an 1820s merchant house to a design by Tom de Paor, who was recently awarded an international fellowship by the Royal Institute of British Architects (Riba) – one of only a handful of Irish architects to receive one.

De Paor’s work has featured five times at the world’s largest visual arts festival, the Venice Biennale, and Riba has described him as one of the “leading architects of his generation”.

Element Pictures has described his Galway building as an “intriguing architectural space” to “explore” in the heart of Galway’s “Latin quarter”.

Lelia Doolan said it had been a “long and winding road for Solas”, but “now Galway’s patient, generous film enthusiasts who never lost faith can rejoice”.

“Here’s a beautiful new tower of song in the heart of the city, a meeting place for visions to prosper, for devilment to be celebrated and for rich landscapes of feelings and ideas to provoke or console our lives,”she said, welcoming Element’s involvement and thanking “all the working men and women who laboured to make this dream a reality”.