‘I, Tonya’: Figure skating was out to get Tonya Harding way before ‘the incident’

Review: Margot Robbie chews up the role for all it’s worth and spits out the sequins 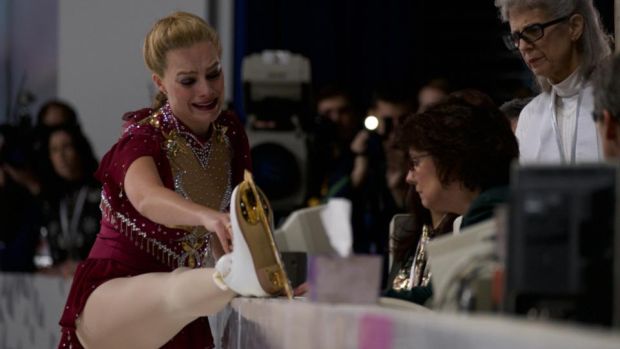 Margot Robbie as Tonya Harding in ‘I, Tonya’

From the get-go, I, Tonya is skating with catastrophe. Mirroring its controversial heroine, Craig Gillespie’s (Lars and the Real Girl) biopic of disgraced figure skater, Tonya Harding is a pointedly prickly, mesmerising, steely entity, smiling through gritted teeth from the ice rink.

Scenes depicting domestic violence oscillate between cartoonish glee and shock and awe. These occasionally tasteless tone-swerves add to an already discombobulating experience and echo Harding’s own dark humour: “Nancy gets hit one time, and the whole world s**ts . . . For me, it’s an all-the-time occurrence,”, harrumphs Margot Robbie’s Harding.

A lesson from history: in early 1994, a figure skater named Nancy Kerrigan was assaulted just above the knee with a baton. The perpetrator was hired by Jeff Gilhooly, the ex-husband of another figure skater, Tonya Harding.

The newly minted 24-hour news cycle soon regurgitated this “incident” (as everyone in I, Tonya calls it) as a cat-fight between all-American good-girl Kerrigan and her nasty white-trash rival, Harding.

Kerrigan won a silver medal at the next Olympics; Harding was banned from the sport. And here comes the OJ Simpson trial. As Bobby Cannavale’s Harding-obsessed Hard Copy reporter helpfully explains, he worked “for a pretty crappy show that legitimate news outlets looked down on, then became”.

It would have been fascinating to see what an actor such as Anne Hathaway might have done as Kerrigan, but in I, Tonya – a film that was produced by and crafted around Robbie – Kerrigan appears only fleetingly. Her sole utterance is an undignified squeal.

So how much did Harding know about the assault beforehand? I, Tonya doesn’t know for sure.

Steven Rogers’s screenplay not only foregrounds the unreliability of the interested parties, it revels in it. The film’s sympathies lie with Robbie, who is roundly abused by her ruthless mother and manager, LaVona (Allison Janney) and her violent, shotgun-wielding husband (an impressively volatile performance from Sebastian Stan).

What might have been a made-for-TV yarn (and was, in 1994, starring Alexandra Powers and Heather Langenkamp) is spliced through by on-camera testimony from aged, contemporary, contradictory versions of Robbie, Janney, and Stan.

Occasionally, images on screen are directly refuted. When Stan’s insecure Gilhooly is chased with a shotgun by a rampaging Harding, Robbie interjects: “I never did this.”

I, Tonya is rather more certain that Gilhooly’s best friend Shawn Eckhardt (Paul Walter Hauser) is a fantasist and a dimwit. It’s certain, too, that figure skating was out to get Tonya Harding long before the “incident”.

Harding, the first American woman to land a triple axel jump in competition, is routinely met with class-based prejudice. The judges don’t like her handmade outfits or that she skates to ZZ Top or that she stubs her cigarettes out on the ice. Their snottiness is met with increased brattiness. Interestingly, fewer than 10 women have repeated Harding’s triple axel in competition, so the film’s convincing recreation required all the collective might of SFX boutiques, Eight VFX and EISKO, skating doubles Anna Malkova and Heidi Munger, and editor Tatiana S Riegel.

A final sequence, outlining Harding’s post-skating celebrity, is as poignant as it is ludicrous.

Robbie is terrific actor, even when the part is beneath her – Harley Quinn in Suicide Squad, Jane in Tarzan – so she chews this role for all it’s worth and spits out the taffeta and sequins. In a less competitive year – sans Saoirse, Frances, and Sally – her performance would surely have been a baton to the knee of all challengers.

Janney, who has already taken home the Bafta for Best Supporting Actress (and, who, is the rightly the bookies’ favourite to take home the Oscar), brings a new leathery hide to tough love. Her undiluted unsentimentality is the perfect compliment for a sporting underdog movie that disobeys the rules.