Harvey Weinstein’s Irish whistleblower: ‘I spent my life blaming myself. It was his fault’ 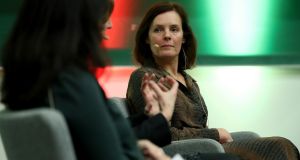 Laura Madden, the Irish whistleblower who was among the first to go on the record against Harvey Weinstein in 2017, has spoken about how she spent her entire life blaming herself for the sexual assault she says he perpetrated on her when she was 22.

“It completely removed my confidence in my work. I had to carry the shame of this assault,” Madden said, of the incident. It happened in 1992 when she met Weinstein in a Dublin hotel for a job interview.

Weinstein, who was found guilty in New York of rape in the third degree and sexual assault against two women, and will face sentencing in the coming weeks, has denied any assault took place.

“I felt complicit in it. I felt I’d somehow brought it on myself. I felt I got the job not out of any merit of my own, but as a kind of version of silencing me. It just made my entire career obsolete in my eyes. It slowly erodes your confidence. It has had long-lasting impacts, which I’m only able to see now.”

Madden, who is from Monaghan, was speaking at an event in Maynooth University, at which she was awarded the 2020 President’s Medal to mark International Women’s Day for her “innate courage and strength” in her decision to go on the record against Weinstein for an article published by two New York Times journalists, Megan Twohey and Jodie Kantor.

When news of the guilty verdict against him came in, she felt numb, rather than celebratory. “Everything you’ve been through for 25 years – the tumult from being attacked in the first place; to speaking about it; to the media focus on the story – has been a really complicated time.” The verdict “just added another layer of strangeness.”

The trial was traumatic for witnesses and for her, Madden said, but it allowed people everywhere “to see the full picture of what sexual assault looks like, what rape looks like. It’s not just a stranger in a dark alley. It’s much more nuanced.”

She is reluctant to share details of what happened to her, worrying that the interest in it can be prurient. She has previously described how he coerced her into giving him a massage, and made a series of escalating sexual demands.

“People want to talk about the salacious side, and not focus on the culture. But maybe we do need to go into the details in order to feel brave enough for the next person to speak up.”

Her wish now, she said, is to see the conversation move on now from apportioning blame to dismantling the structures and the systems that allow abuse to flourish. “I don’t think about him in prison. I’m not really that interested in the man,” she said.

She became emotional as she described how it was only six months after the initial story, while she was filming a documentary, that she stopped blaming herself. “They intercut with photos of me as a young girl, and I just realised how young and innocent I was. I felt really upset that I had spent my entire life blaming myself, and actually it was his fault.”

In a live interview with RTÉ’s Audrey Carville, she said that men need to be brought into the conversation. “I don’t think isolating and becoming polarised is helpful. We’re all humans, and we need to try and find the humanity in all of us.”

Also taking part in the discussion in front of a packed lecture hall in Maynooth were Prof Linda Connolly, director of Maynooth University Social Sciences Institute, and Dr Anne O’Brien, an academic and author of Women, Inequality and Media Work.

If the artist offends, should we pluck out their work?
10