Gurinder Chadha: ‘I didn’t think people who looked like me could be film-makers’ 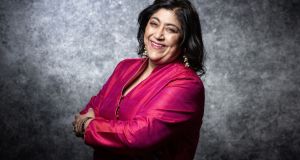 There was a fascinating convergence of talents at this year’s Galway Film Fleadh last month, when Gurinder Chadha, the director of Bend It Like Beckham, and Allison Anders, director of the criminally underrated Grace of My Heart, appeared at the festival.

Both women are Sundance alumni dating back to the heady days documented in Peter Biskind’s account of 1990s independent cinema, Down and Dirty Pictures: Miramax, Sundance, and the Rise of Independent Film.

Chadha developed her screenplay for What’s Cooking? – a film that would open the Utah showcase in 1999 – at the Sundance labs in the immediate years after Anders’s Gas Food Lodging became, alongside Quentin Tarantino’s Reservoir Dogs, the talk of the festival.

And here their paths diverge. Anders, despite her remarkable film-making chops, has, alas, drifted into TV movies and the Hallmark Channel, just as other dazzling Sundance talents including Leslie Harris (director of the brilliant Just Another Girl on the IRT) have drifted into academia.

Chadha, however, has hung on in there to score box office records with Bend It Like Beckham and Angus, Thongs and Perfect Snogging, and, as of now, work with Bruce Springsteen.

“After I made my first film, Bhaji on the Beach, the conversations were all about Tarantino and Trainspotting,” recalls Chada. “Everything became very laddish so it was very difficult for me to get a second film off the ground. I’ve never been very masculine and if you see my body of work, it’s from a very female perspective. So the things I wanted to do were different. And mainstream. And sadly, people don’t value that. People stop me constantly in the street for Angus, Thongs and Perfect Snogging but most critics were dismissive of it. I find it interesting that critics love the American versions of those stories like Ladybird. And I think that’s because I wanted to make commercial films about subjects that people think are art-house. And that seems to irritate some of the people who write about cinema.”

Chadha, as you might expect from the director of Angus, Thongs and Perfect Snogging, is easy to like and easy to chat to. Sitting on the mezzanine alcove of the Light House Cinema, she swings her legs over the side of the armchair she is sitting on, like we’re both at home, chilling.

Born in Kenya, she’s an English woman of Indian descent. She began her career as a news reporter with the BBC, and went on to direct several award-winning documentaries, including I’m British But... which brought her to Belfast to interview Ramesh Rana, son of hotel tycoon Lord Diljit Rana. That film set the tone for Viceroy’s House, her 2017 drama concerning Nehru, the Mountbattens and Indian independence and for her later explorations of the migrant identity. In It’s a Wonderful Afterlife, a widow (Shabana Azmi), hoping to marry her daughter off, redresses failed matchmaking attempts with a killer curry. In Bend It Like Beckham, the film that launched the careers of Parminder Nagra and Keira Knightley, a West London teenager goes against her tradition-bound Sikh parents when she joins a girls’ football team.

Chadha is as English as she is Asian, she says.

“When you’re part of the diaspora you have multiple identities,” says the director. “You are multilingual and attached to more than one nation and out of that comes a new kind of cinema. And there’s something about being culturally specific that speaks to people. One of my favourite, favourite shows on TV right now is Derry Girls because it’s so specific and it’s such a clever way to talk about divisions.”

She laughs: “Or maybe the Irish and the Indians have a lot in common. Maybe that’s why my films play well here.”

Film4 took note of Chadha’s early documentaries and decided she was a voice that needed nurturing. They brought her in to develop Bhaji on the Beach, a good-natured 1993 comedy about a multi-generational group of Punjabi women on a daytrip to the Blackpool Illuminations, for which Chadha won the Evening Standard Award for Best Newcomer to British cinema.

“I never thought I was going to be a film-maker,” says Chadha. “I didn’t think that people who looked like me could be film-makers. I thought I was going to work for Oxfam or something. So to have lasted this long is a miracle. The thing is, I love storytelling, but I feel I have a responsibility to tell stories that make the world a better place. I trained as a journalist and I thought that was the way I was going to do that. In a way that is what I still do. I’m just doing it on a bigger canvas. The great thing about being a journalist is that once you’re a journalist, you’re always a journalist. And that has really helped me in film-making because I’m always very focused on what is the story I’m telling: Why am I telling this story? How do I get to the point? I apply the Five Ws to everything, whether I’m shooting or writing or editing.”

Blinded by the Light, Chadha’s seventh feature as writer-director, is a joyful jukebox musical inspired by the music of Bruce Springsteen and the life of the Guardian journalist Sarfraz Manzoor. Set in Luton in 1987, this loose adaptation of Manzoor’s 2007 memoir, Greetings from Bury Park, concerns Javed (Viveik Kalra), a teenager who is struggling to strike a balance between A levels, expectations from his Pakistani father, and a burning desire to write. Acting on the advice of a Bruce Springsteen-obsessed Sikh friend, Javed finds increasing solace in the music and words of The Boss. Chadha, another British-Asian diehard Springsteen fan, has known Manzoor for years.

“The first thing to do was to get in touch with Bruce,” recalls Chadha. “And in 2010 he came to Britain for the premiere of The Promise at the BFI and I took Sarfraz. We both stood on the red carpet as he approach and were very excited and amazingly, he walked over the Sarfraz, who he recognises as the Pakistani at the front of all the Bruce Springsteen concerts, and says: ‘I’ve read your book it’s really beautiful.’ So I thought: ‘This is our moment’ and I said: ‘I want to make a film: will you support us?’ And he put us in touch with his manager and we’ve kept in touch ever since. I knew that we had to write something that was going to please him. And when we finally sent the script, he said: ‘I’m all good with this’ and that was the green light.”

Blinded by the Light is a lovely, feel-good picture, but it has a darkness around the margins. The film is set in a town where austerity and unemployment have taken a huge toll and where a billboard of Thatcher looms. In a key sequence, casual everyday racism coalesces into a violent National Front rally.

“I was several draughts in when the ugliness of Brexit and all the xenophobia around Brexit came up so I didn’t shy away from talking about the National Front,” says Chadha. “Obviously that’s very relevant for today and thankfully Britain has changed a lot since then. That’s not to say there aren’t extremists but it’s a very small minority that gets a lot of publicity. I think the majority of people are people who want to raise their kids as tolerant human beings. I think it’s great that when people are racist or sexist or offensive there’s a backlash.”

The reviews have, to date, been ecstatic: Johnny Oleksinski at The New York Post has called it “the feel-good movie of the year”; Adam Chitwood of Collider has described it as “a rapturously joyous, heartfelt, and genuinely insightful film.” There is, however, one review that matters more than all the others.

“I finished the film and I went to New York because Bruce was on Broadway,” says Chadha. “So I went to his place and sat in a little room, it was just the director’s cut. We hadn’t done the sound mix. So that was nerve-wrecking and I had to apologise profusely for the quality of the sound. And all of his managers sat down as I put it on. And I sat behind him and I could see him at a diagonal and I could see the crow’s feet when he was smiling and the places where he really, really laughed. And at the end, I went to switch the lights on and he got up and gave me a big kiss and a hug and said: ‘Thank you for looking after me so beautifully.’ And we just sat down for an hour and talked about the choices we made with the film and he said: ‘Don’t change a thing. It was amazing.’”

Blinded by the Light is released August 9th