Review: This effort to replicate the commercial sucess of The Lego Movie is a creative flop 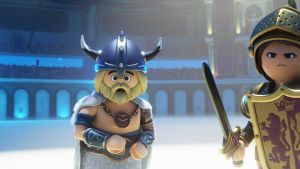 If, in some future communist Utopia, you were teaching a course on the moral decline of the west, you could do worse than focus on two minor characters in this shameless, almost entirely terrible promo for German plastic dolls.

I can’t be bothered to look up the names, but somewhere in here we meet beings that bear eerie similarities to emanations of the Star Wars universe: a drone in the mode of R2-D2 and a bounty hunter with shades of Boba Fett.

The crappy wheels spinning within slightly less crappy wheels do more than even the horrible animation to make the blameless parent’s head ache.

We can safely assume that Playmobil: The Movie owes its existence to the commercial success of the incalculably superior The Lego Movie. That film had great fun nodding towards the multiple-franchise confusion – involving Batman, most fruitfully – that any approach on the Lego universe was sure to generate. Kids sling the Green Lantern in the same space as Lando Calrissian and so on. The animators did the same and laughed knowingly all the way to a big bank made of Danish bricks.

There is a limit to how cynical such gags can be. The Playmobil people are wise to resist any temptation to work a gag around the fact that they’re (let’s be kind) referencing well-known characters within a film (we’re still being kind) inspired by another toy movie that actually had limited rights to those characters. Still with us?

The downside to such discipline is they leave themselves with no high concept other than the notion – already flogged to death by Lego – that various popular genres exist in neighbouring parts of the same universe. There are Vikings over here. There are cowboys over there. That sort of thing.

The live-action framing story has at least the virtue of galloping inappropriateness. We begin with Anya Taylor-Joy singing a stupid “we can do anything” song while a startled child actor looks nervously off camera for assistance. Moments later we are told the siblings’ parents have been killed and that our heroes are doomed to an existence in which “anything” is off the table.

After that impressive surge of mid-Victorian misery, the heroes are propelled randomly into the kingdom of the German plastic dolls. Daniel Radcliffe voices yet another unnecessary Bond parody. Adam Lambert voices the Emperor Maximus. There are more terrible songs. I guess bereavement loses a little of its sting in that environment.