Blinded by the Light: One of summer’s most irresistibly entertaining films

Review: Actors play delightfully off one another as every beat hits with resounding force 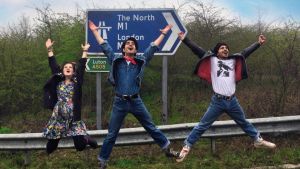 Nell Williams, Aaron Phagura, and Viveik Kalra in Blinded by the Light.

Film Title: Blinded by the Light

There has long been an implicit (almost certainly accidental) challenge in Gurinder Chadha’s work. Going right back to Bend it Like Beckham, the films have wondered how much unpasteurised cheese a viewer can endure with his or her inspirational uplift.

It’s been 17 years since Parminder Nagra and Keira Knightley bonded in the penalty zone, but the filmmaking has become no more elegant or controlled. It’s as if the broadness is a vital part of the aesthetic. We are so overcome with a sincere desire to get these messages out that we have no time for nuance. What you call naivety we call passion. Will that do?

Blinded by the Light displays Chadha’s gifts and limitations in boldest hues. Based on Sarfraz Manzoor’s memoir of growing up as a Bruce Springsteen fan in 1980s Luton, the picture is sentimental, implausible and laboured. It is also among the most irresistibly entertaining films of the summer.

Could a serious music fan in his late teens really have heard not a note of Springsteen until 1987?

Kulvinder Ghir, veteran of Goodness Gracious Me, is adorable as the lead’s dad.

What does most to banish cynicism, however, is the film’s effective communication of the feeling – strong with teenagers, never entirely vanished in any music fan – that one good pop song can change the world. Nobody is arguing that Jungleland fixed Thatcher’s Britain, but we are reminded how, for a few minutes at least, it was possible to believe this might be so.

By Golly this film has a familiar structure. You may remember that structure from such films as Bend it Like Beckham by one G Chadha. Javed is the bright, imaginative child of first-generation Pakistani immigrants who huddle around tradition in an often-hostile environment.

For all its bold strokes, the film is not short on chilling reminders of historic and ongoing intolerance. Neighbouring children have urinated so often through one Pakistani family’s letterbox that they have been forced to put down plastic matting. The National Front is looming on street corners.

Javed’s dad Malik, a stubborn man, with an ecumenical passion for the Jewish way of doing things, wants Javed to take a nice safe job in one of the respectable professions. “You can choose to be a doctor or a lawyer, so don’t say I don’t give you any freedom!” he says.

But Javed has other plans. Still recovering from an epiphany that struck on first hearing Springsteen, he plots to study in Manchester with a mind to becoming a journalist. He falls in with a posh girl who is rebelling against Thatcherite parents. Inter-generational tensions boil over.

We have just a few questions. Could a serious music fan in his late teens really have heard not a note of Springsteen until 1987? The news that Bruce opened up his back catalogue on reading the script warms the heart, but that doesn’t mean you have to layer virtually every scene with a song played out in its entirety while the lyrics are projected on screen.

And what is happening in the chaotic, semi-choreographed sequences? The film can’t decide if we’re in the fantastic realm of the MGM musical or if the cast is just running round Luton while we, but not they, hear Born to Run at full volume. (I regret to say a passing tramp waves his fist at the line “tramps like us”.)

Go on in this fashion and you’ll end up like the dad complaining that the under-11 football team is not making sufficient use of the through ball. Every beat is hit with resounding force. The actors play delightfully off one another. No heart could be more securely nailed to the “right place”.

Find your own Springsteen quote to close off the review with heavily qualified triumph.

The wise man, a short story by Donal Ryan
6 Welcome to the child sex capital of Europe
7

Leg warmers and legal rows: Behind the scenes of St Petersburg’s Swan Lake
8