Animals: A bit too freewheeling for its own good

Review: Set in swishest Dublin, film has enough energy to compensate for its many implausibilities 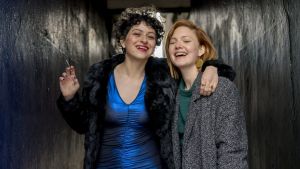 Erwin Schrödinger first outlined the concept of the multiverse in Dublin in 1952. Perhaps the makers of Animals had this in mind when they set their film in some preposterous version of the Irish capital wherein folk who can’t hold down barista jobs live in vast Georgian houses, or perform sean-nós in salons surrounded by objects d’art; they dress in finest silks and never run out of money, which is just as well given the vast quantities of booze they swill down.

A parallel dimension might also account for English actor Holiday Grainger’s approximation(?) of a Dublin(?) accent, a cadence that merits(?) a spot between Kevin Spacey in Ordinary Decent Criminal and Gerard Butler in PS I Love You in the Big Book of Bad Brogues.

Happily, Australian director Sophie Hyde’s drama has enough energy to compensate for the film’s many implausibilities. Adapted by Emma Jane Unsworth from her 2014 novel of the same name, Animals stars Grainger (Cinderella) and American Alia Shawkat (Arrested Development, Transparent) as Laura and Tyler, two best friends and flatmates who live in swishest Dublin.

When Tyler’s younger sister Jean (Amy Molloy) announces that she’s pregnant, aspiring novelist Laura gets into a flap, fretting over her writing (or lack of writing). She gets suspiciously swiftly engaged to Jim (Fra Free), a successful pianist, a development that dampens Laura and Tyler’s commitment to getting blindly drunk at all hours.

Hyde’s film is buoyed by plenty of zingers, Shawkat’s comic timing, and Bryan Mason’s sleek cinematography. The Irish cast, notably Pat Shortt, Olwen Fouere, Fra Free, and Amy Molloy, shine in supporting roles. Emma Jane Unsworth’s daringly unlikeable characters are commendable. But, in common with Laura and Tyler, Animals is a bit too freewheeling for its own good.

The narrative is strangely unshapely and some of the cuts are questionable: a scene depicting the girls stealing drugs from a block of flats falls somewhere between enigmatic and unintelligible. Oh, and implausible.