The fluency of this politically engaged actor, just 19, is staggering. Maybe Oprah is right? 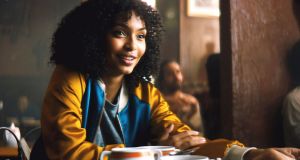 Yara Shahidi in The Sun is Also a Star

One downside to the American fervour for opportunity is the need to turn every sane, articulate celebrity into a future president. (You can make your own jokes about how poorly the incumbent meets that humble definition.) The Rock got a bit of that. So did George Clooney.

Oprah Winfrey – maybe to distract from suggestions that she should run in 2020 – recently wrapped the aspiration around younger African-American shoulders. “I hope I’m still around when she becomes President of the United States, ” Oprah said of Yara Shahidi. “And that is going to happen – if she wants it to.”

How to put this without contributing to the hysteria? I think it unlikely that Shahidi, star of the TV series Black-ish, busy activist, Harvard undergraduate, will become president. But I have met few 19-year-olds who sound more like future presidential material.

Just listen to Shahidi talking about her new film. The charming, dreamily shot The Sun Is Also a Star – a kind of Brief Encounter for lovely young adults – finds a couple savouring a last day in New York before one of them is deported.

Hearing this young woman of Iranian and African-American descent discuss the United States’ recent shifts in policy towards immigrants, I find myself feeling guilty for the behaviour of my entire generation. I didn’t vote for Donald Trump. But most who did were over a certain age. I wonder if Shahidi blames us. She would have every justification.

“Yes and no,” she says. “I wouldn’t have the freedoms I do have without what the earlier generations did. I am a product of intergenerational support and activism and work. That gave me the ability to live the life that I have led.”

Her fluency is staggering. At an age when some of us focused most attention on remaining upright after three bags of cans, Shahidi, creator of the Eighteen x 18 movement, aimed at getting young people to vote, can improvise a manifesto without pausing to inhale.

“There is a disappointment in seeing people let go of that progress and not seeing the importance of it,” she continues. “It is disappointing to see how many people have to face the repercussions of something they didn’t vote for. A select group decided that this was going to be our collective reality.”

Yara Shahidi was born in Minneapolis when the new century was barely a month old. Dad is Iranian-American. Her mother is African-American. (A cousin is the rapper Nas.) From the age of six she worked on television and print commercials for the likes of McDonald’s, Ralph Lauren and Disney. She leaped a few steps up the ladder in 2009 when she appeared opposite Eddie Murphy in the undervalued, properly funny Imagine That.

“My papa is a photographer on commercials. My mama started a commercial actress,” she says. “I started in this industry with them. It started very much as a hobby. It may sound counterintuitive, but acting was something that we did, not who we were. We enjoyed shooting commercials together. It wasn’t until I was seven that I got my first movie commercial. At first I said no.”

You have to love that “it wasn’t until I was seven”. So much life passes a person before he or she reaches that age. There is still a YouTube video out there of her chatting to young people during the press junket for Imagine That. Her confidence and fluency is such that, even then, Oprah might have picked her for the presidency.

“I was able to read the script for myself and, falling in love with it, I thought maybe I do want to try this,” she says. “We were moving through this world with no expectation of whether it ends tomorrow or goes on for ever. We took it case by case. Is this something the family wants to do? Is it something I want to do?”

By this stage the family had moved to Los Angeles and jobs came reasonably steadily. She is in episodes of Lie to Me, Cold Case and Scandal, but it was Black-ish that really made her name. The sitcom was nominated for a hatful of Emmys and recently generated an equally acclaimed follow-up called Grown-ish.

The Sun is Also a Star, adapted from a book by Nicola Yoon, plays like Shahidi’s defining lurch into adulthood. It’s a delightful confection with a serious undertow. New York has rarely looked so delicious.

“What made it difficult made it special,” she agrees. “We were not closing downs streets to shoot this. People are still moving around doing their daily business. We are moving through New York life. For me, living in Los Angeles, the way we walk down the street is different. We take our time. That can’t be faked or mimicked.”

Though not yet able to drink legally in her own country, Shahidi has already established two parallel careers. Sufficiently striking to boss the cover of any upmarket fashion magazine, relaxed and convincing with dialogue, she can count on endless offers from movie and TV. As she ploughs through Harvard, however, the activism seems at least as important.

“Eighteen by 18 started because, as somebody who is interested in news and is a first-time voter myself, I realised how confusing voting can be,” she says. “I listen to the news on a regular basis. I try to be well informed. I have the time to read books. Yet it’s still a convoluted process.”

She goes on to talk me through the seemingly ludicrous stream of bureaucracy – something the US is very good at – that flows between the citizen and the ballot box.

“Simple things like that matter,” she says. “Those are all things that may seem small. But if you have a family and a busy life, those things can make all the difference between whether you have the time to engage or not. Then you have to deal with political jargon. That takes a separate understanding of the world around us.”

None of this should give the impression that Shahidi is a dreary swot. Her 3.8 million Instagram followers get to watch her dance like a maniac on pretty beaches, smile on red carpets and – don’t ask me, but this is what it says – enjoy “grandma’s fried pies”. James Baldwin is her current Twitter Avatar, but Prince also gets a mention.

Shahidi offers a stirring example of Generation Z in motion. She is fun. She also cares about politics and representation.

“Being black and Iranian is something I am very proud of,” she says. “My heritage is very individual to me. I am so grateful to be part of larger communities. I love the tradition of both communities and I think it is essential. But it is still something personal. We express our heritage in different ways.”

She’s tangling and then untangling another cluster of arguments. I get the sense she could do this all afternoon.

“Those incongruities can lead to us feeling incomplete,” she says. “I am talking in the second person. It’s not about being half-anything. You have to figure out how you feel fully both.”

That last line would work nicely on a social-media profile. It would also work nicely as a political tagline. If I am doing my sums right, she can run for the presidency in 2035.

The Sun is Also a Star opens on August 9th

Marita Conlon-McKenna: ‘I didn’t think I would write another Famine novel’
9