Hobbs & Shaw: Fast & Furious needs to get back to basics

Review: Neither Johnson nor Statham has much to work with, but the banter is awful 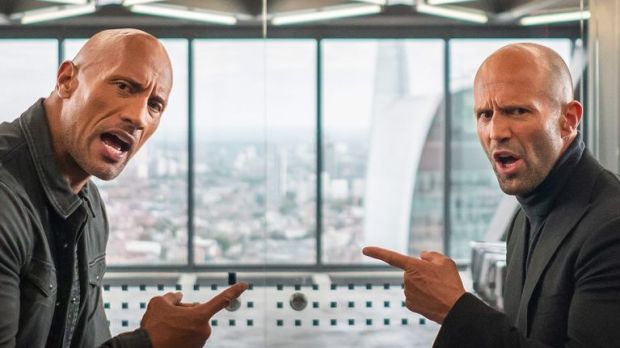 ‘The awful banter is something else,’ writes Donald Clarke

“I don’t have time for that alpha-male stuff right now,” somebody says. Ha ha! You’re in the wrong place, sister. The first spin-off from The Fast and the Furious – scarcely distinguishable from a full-on ninth episode – offers the world a Mardi Gras of ironically repositioned machismo. After just half an hour, I was tempted to spread foam across the screen and scrape off the stubble that was already breaking through. Rock–paper–scissors is a game for gurls. Rock-Statham-Elba is the pastime for chaps like us. Everything beats everything, but nothing loses to anything else. We all remain triumphant.

The key relationship here is that between Luke Hobbs (Dwayne “the Rock” Johnson) and Deckard Shaw (Jason Statham). The former is bald and American. The latter is bald and English. The opening sequence works hard at setting up distinctions between the two – Hobbs reads Nietzsche, Shaw drinks lager – and, sure enough, when they come together they’re like chalk and, well, a less effective form of chalk.

None of us wishes to say a bad word about Statham (least of all to his face). He is as vital to the British identity as overcooked cabbage and Mad Cow Disease, but, on this evidence, he is no match for the all-conquering Dwayne. There are no problems with the fight sequences. The former top-level diver is still fitter than most men half his age and he gets through the martial choreography with no audible creaks or snaps.

The awful banter is something else. Neither man has, to be fair, much to work with. Chris Morgan and Drew Pearce’s screenplay deals in the class of sorry banter that was once bellowed over the divide in Blind Date. Johnson finds ways of injecting some life into the exhausting snipes and tired rejoinders. In contrast, Statham delivers his lines in discrete chunks, none of which varies in emphasis from that before or after. Unless you remember earlier episodes, the ongoing antipathy makes no sense. They’re both tough and angry. They’re both committed to locating and disabling a “programmable bio-weapon of Biblical proportions” (no, not a plague of frogs).

One cause of animus might be cultural. If Hobbs is, however, minded to kickback against the Brits, he is going to find himself greatly outnumbered. Hobbs & Shaw comes across, among other things, as an essay on Englishness composed by somebody whose only experience of that country was Jack Wild’s performance as the Artful Dodger. Jason Statham, Idris Elba, Helen Mirren and Vanessa Kirby all appear to be struggling with accents that are theoretically their own. Desperate to reassure us that Elba’s villain really is from some part of London, the script saddles him with the name “Brixton”. Sadly, no characters are called Primrose Hill, Crouch End or West Ruislip.

Mirren has only an extended cameo as Jason’s banged-up mum, but she does have time to introduce the best character in the picture. For all the hyper-male puffing, Hobbs & Shaw is most memorable for the opportunities it gives to Vanessa Kirby. Already a smashing villain in Mission: Impossible – Fallout, the former Princess Margaret injects fruity energy into her paper-thin role as Shaw’s stroppy sister. Coping admirably with infection by the “programmable bio-weapon of Biblical proportions” (not locusts either), she helps confirm that no kick-ass film is now complete without women kicking some of the asses. There are even a few conspicuous nods to the post-Weinstein rearrangements. “This isn’t 1955 anymore,” Hobbs notes, before going on to discuss the dynamics of consent.

None of this will matter to F&F fans in search of more automotive mayhem. Sadly, there is not nearly enough of that and what we do get rarely reaches the heights of top episodes such as Fast Five or Furious 7. A chase through London is clearly filmed somewhere else (Glasgow, as it happens). A late Samoan pile-up relies too heavily on the physically implausible. No motorbike jumps through any fiery hoop.

They need to get back to basics.