Hillbilly Elegy: The Black and White Minstrel Show was subtler in its stereotyping 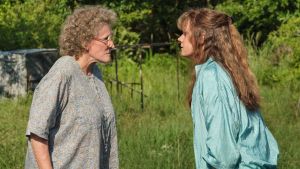 Come and listen to my story about a man named Ron. Safe pair of hands, rarely puts a foot wrong. And then one day, he was shootin’ as you do. And in through the lens came a bubbling poo. Crap that is. Farmhouse fertiliser.

The temptation to continue with a pastiche of the theme tune from The Beverly Hillbillies is close to overwhelming, but I am not paid nearly enough to waste time entertaining the sparse band of greybeards who remember that ancient series.

The comparisons are, nonetheless, worth considering. Though fond of its heroes, the 60-year-old sitcom drew humour from demeaning and patronising the mores of the Ozarks. The newly wealthy family use moonshine as medicine and refer to the swimming pool as the cement pond. You’d never get away with that sort of classism now. Right?

Yet here we are. Back in 2016, a number of publications with the word “New York” in their titles suggested readers peruse JD Vance’s Hillbilly Elegy to gain some understanding of how Trump voters got that way.

Now a lawyer and venture capitalist, Vance talked us through his tough upbringing in the Appalachians. His mother was a drug addict. His grandmother was an alcoholic. They were difficult people but they had a hard-bitten decency. They’d be sure to invite you to their locality to have a heapin’ helpin’ of their hospitality (I’m doing it again).

Consider the degree of dressing up imposed on Amy Adams and Glenn Close as, respectively, JD’s mother and grandmother. I’m betting the film-makers wouldn’t layer so much wig and so much slap on either actor if she were playing an organic yoghurt magnate in Williamsburg.

As the addicted and irrational Bev, Adams, barely able to keep head aloft beneath a stack of matted beige curls, flails and bellows like a woman trying to make herself heard over a nearby plane crash. Little sensitivity is offered to balance the deafening misbehaviour.

Adams can reasonably tell herself she has made a valiant effort with a one-note role and move on to the next unconverted Oscar nomination. Close’s calamity is something else altogether. Put simply, it requires an actor of genius to deliver a performance this preposterous.

There is a Nic Cage film out there waiting for Close’s Mamaw to cackle malevolently before blowing away the pursuing posse with a sawn-off shotgun. It comes as something of a jolt to encounter, in the closing credits, archive footage of an ordinary elderly woman who doesn’t look as if she buys her clothes from the “Scary Hick” section of the Halloween store.

The folk behind the Beverly Hillbillies knew they were making fun of a rural underclass. Hillbilly Elegy seems to believe it is on their side. A key scene finds the grown JD (Gabriel Basso, satisfactory), now a law student at Yale, discussing a visit home with snooty superiors. “Who are all these rednecks?” one of them imagines Vance thinking. He scowls at the snobbery. But that phrase could easily serve as an alternative title for this baffling film. The Black and White Minstrel Show was more subtle in its stereotyping.

Profiting from a nice-enough faux-bluegrass score by Hans Zimmer and lavish cinematography from Maryse Alberti, the picture boasts the production values you expect when someone like Ron Howard shakes the Netflix money tree. But one’s brain aches pondering why anyone thought this would be a good idea.

Y’all come back now, you hear?

On Netflix from November 24th