The Vast of Night, Mike Wallace Is Here, Only the Animals, and The High Note 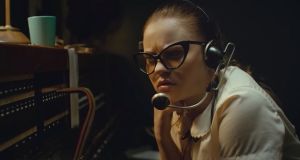 Sierra McCormick in The Vast of Night

Gripping, fast-moving documentary on the late American TV journalist who invented the modern, probing interview and, with 60 Minutes, helped launch the “magazine show”. As is often the case with contemporary documentarians, Avi Belkin choses to put only archival material on the screen. Edited in terse segments, the picture rattles along at such a pace one experiences blueshift as historical events race by. A little more air might have been welcome, but this remains a hugely entertaining film for anyone interested in the American way of communicating. DC

Twisty, impressive French mystery that, from various different perspectives, tells the story of a young woman’s death in a snowy bit of the countryside. A farmer’s wife is having an affair. The victim was in a troubled relationship with a waitress. Hang on. Now we’re in Africa. Moll, best remembered for the Hitchcockian Harry, He’s Here to Help (2000), falls back on coincidences and unlikely twists to tie together his dangling strands. But the pace never slackens and the visuals remain evocative throughout. DC

What if the kind of list-making music snob who works at the record store in High Fidelity was a female with nicer manners? What if she was hoping to become a record producer in the boy’s club of the music industry? Despite a late plot development that could have been lifted from Will Ferrell’s telenovela comedy, Casa de Mi Padre, The High Note has enough heart and grace to see it through. Johnson is, as always, a pleasure in the lead role. TB

Is Kanye West’s White House bid genuine or a publicity stunt? Or could it be a bipolar episode?
10