The High Note: Moments of greatness but a few out-of-tune bits 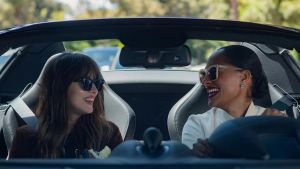 If you didn’t know that Flora Greeson’s script for The High Note – or Covers, as it was then called – featured on the 2018 Black List, you might guess as much. The list, an annual survey of the most-fancied screenplays not yet produced, has to date produced some Oscar winners, including Juno, The King’s Speech and The Revenant. More often it yields films such as Stoker or I, Tonya – movies with flashes of greatness and slightly crooked seams.

The High Note pivots around several intriguing ideas. What if the kind of list-making music snob who works at the record store in High Fidelity was female and had nicer manners? What if she was hoping to become a record producer in the boys’ club of the music industry?

Record producer? Music industry? These antiquated conceits are offset by a very old-fashioned working-but-dreaming narrative, not unlike Working Girl or 9 to 5.

Thus musical nerd Maggie (Dakota Johnson, always a pleasure) has served – and how – as a personal assistant to washed-up superstar Grace Davis (Tracee Ellis Ross) for three years. Maggie secretly hopes to produce a new record with Grace, but there’s a protective manager (Ice Cube) and a room full of male executives who would prefer Grace to steer clear of new material in favour of a lengthy residency in Las Vegas. “In the history of music only five women over 40 have ever had a number one hit,” observes a defeated Grace.

While Grace tussles with her handlers, Maggie strikes up a professional and then romantic relationship with aspiring musician David (Kelvin Harrison Jr). Around the margins are a doctor roommate (Zoë Chao) and a widowed dad (Bill Pullman). See what we mean about slightly crooked seams?

Despite a late plot development that could have been lifted from Will Ferrell’s telenovela comedy Casa de Mi Padre and a wacky subplot/cameo with Eddie Izzard, The High Note has enough heart and grace to see it through. In common with her recent Mindy Kaling headliner Late Night, director Nisha Ganatra stays focused on Maggie and Grace’s complicated relationship as it oscillates between servitude and friendship.

LA looks as dreamy as it did in Once Upon a Time in Hollywood. And the music is pretty convincing too.