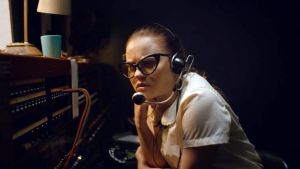 Sierra McCormick in The Vast of Night

Film Title: The Vast of Night

Andrew Patterson’s lovely, clever indie sci-fi – a major prize winner at Toronto, Slamdance, Edinburgh and beyond – demonstrates that ingenuity can still win out over expensive studio product. The Vast of Night, which was snapped up by Amazon and is sure to please fans of such similarly scrappy genre breakthroughs as Monsters and Primer, wears two major televisual influences on its sleeve while departing for undiscovered country.

The first is The Twilight Zone. The film uses a cute (but sometimes distracting) clone show called “Paradox Theatre” as a framing device. Two prime what-ifs used by Rod Serling’s most famous creation – “There’s something in the sky” and a muffled communique – underpin the narrative.

The second TV allusion is The X-Files. There’s more than a touch of period Mulder and Scully about the movie’s main characters. Indeed, the action might be unfolding down the road from a younger Smoking Man flashback.

In Cayuga, New Mexico, in the late 1950s, Everett (Jake Horowitz), a DJ at a local radio station – his “ticket out of here”, he hopes – swaggers into a high school basketball game and, after a few distractions, sets up his recording equipment. A tracking shot stays with him until he runs into Fay (Sierra McCormick), a student and sci-gal who by night works as a telephone switchboard operator.

She has a new tape recorder and hopes Everett will show her how it works, though her interest seems wider than the equipment. Some mansplaining – this is the 1950s – and more camera tracking later and Fay returns to her switchboard where a woman on a crackling line issues a warning.

Meanwhile, Everett’s radio station’s broadcast is interrupted by a strange sound. An army veteran named Billy (Bruce Davis) calls in to say he has heard that sound somewhere before. And the night is still young.

Available to stream on Amazon Prime

Black Water: Abyss – The first cinema release in months. It must be a great movie, right?
Real news has value SUBSCRIBE