Mike Wallace Is Here: Portrait of a great American interviewer 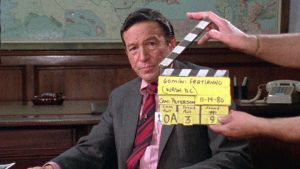 Mike Wallace: Probed harder and more flamboyantly than his contemporaries at evasive subjects

There are some gaps in our knowledge of American culture. We recognise their novelists, pop stars and comedians. We certainly know their movie stars. Most people on this side of the Atlantic will be shakier on televangelists and ice hockey players.

Similarly, American television journalists have an erratic engagement with fame in the old world. Katie Couric embarrasses Sarah Palin; Megyn Kelly gets on the wrong side of Donald Trump. For the rest of the year, these enormously rewarded celebrities remain legends within their own domain alone.

Mike Wallace, for instance, is perhaps best known here as a senior supporting character in Michael Mann’s The Insider. The real Wallace, who died in 2012 at the age of 93, was apparently not entirely won over by Christopher Plummer’s incarnation: vacillating, cautious, uneasy. But that distinguished actor undeniably caught the regal nature of the reporter and interviewer. He entered the room as Catherine the Great might once have boarded a galleon (with apologies to Carly Simon).

The investigation into “big tobacco” that inspired Mann’s film sits at the heart of a fascinating, gripping documentary. Mike Wallace Is Here weaves a critique of American media into an accidental history of the nation’s travails in the postwar years. Vietnam, Watergate and the Iran hostage crisis are all touched upon. So is the uneasy relationship between news and entertainment.

Early on Bill O’Reilly mentions that he always saw Wallace as an inspiration. The latter doesn’t much warm to this suggestion, but the Irish-American bruiser makes a degree of sense. As the film makes clear, Wallace entered the news business from the world of light entertainment, and for all his rumbling gravitas – Don Draper addressing the board – he remained a showman.

After serving in the US navy during the war, Wallace found work as a radio announcer on such shows as Sky King and The Green Hornet. He appeared in routines opposite the satirical bandleader Spike Jones. As late as the early 1960s, after moving on to interview shows such as Night Beat and the Mike Wallace Interview, he was making most of his loot from advertising Parliament cigarettes (no wonder he was cautious about the tobacco story).

It was, perhaps, the showbusiness background that gave him the confidence to probe harder and more flamboyantly at his evasive subjects. Devotees of the sainted Ed Murrow – the subject of George Clooney’s Good Night, and Good Luck – may be unnerved to see his emollience contrasted with Wallace’s harder edge. His background in entertainment surely helped him perfect the affected discombobulation that so many interviewers use when confronted by a disingenuous circumvention – look like you don’t understand when you know perfectly well what’s up.

The earlier interviews make gripping viewing. He was as happy to grill Eleanor Roosevelt as he was the Imperial Wizard of the Ku Klux Klan. The oily monochrome and the sweaty lights now give those sequences the quality of media noir. One half-expects Wallace to whip out a blackjack and give Mrs Roosevelt a going over. “I think you will agree that a good many people hated your husband. They even hated you,” he says with an inclined head.

Wallace then moved on to the indestructible 60 Minutes for CBS. That American institution – arguably the first “magazine show” – seems a little brash to our eyes, but it unveiled awkward truths and troubled the establishment. Wallace’s most tricky moment came when Gen William Westmoreland, a famously bellicose commander, sued the station over comments about his handling of the Vietnam War. The case was eventually dropped.

As is often the case with contemporary documentarians, Avi Belkin chooses to put only archival material on the screen. Edited in terse segments, the picture rattles along at such a pace one experiences blueshift as historical events race into the distance. A little more air might have been welcome, but this remains a hugely entertaining film for anyone interested in the American way of communicating.

Video on demand at Apple and other sources from May 29th