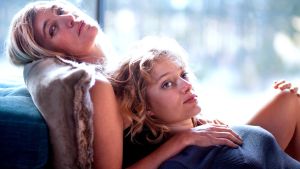 Film Title: Only the Animals

Attendees at last year’s Venice Film Festival, at which Dominik Moll’s latest premiered to some acclaim, could, in the opening minutes, be forgiven for wondering if they were in the right cinema. The snowy French mystery begins with a young African riding through a village with a goat resting on his shoulders. We then cut mysteriously to an agricultural region of the Causse Mejean. The whiplash is disconcerting.

Moll, best remembered for the Hitchcockian Harry, He’s Here to Help (2000), waits some time to connect the two locales. Fair enough. The director, working from a novel by Colin Niel, has a great deal on his plate. Even before we return to Ivory Coast (for so it was), we have to tie together four takes – not sufficiently different to allow Rashomon comparisons – on the discovery of a young woman’s body in the wintery mountains.

We begin with Alice (Laure Calamy), a farmer’s wife and insurance saleswoman, visiting her neighbour Joseph (the perennially morose Damien Bonnard) to discuss business. It soon transpires that they are having an affair. Joseph later encounters an abandoned car on the side of the road that once contained the now deceased Evelyne (Valeria Bruni Tedeschi).

If we were in the business of spoiling the plot, it would require a lump of prose that would take longer to read than the film takes to watch. Every minute adds on another puzzle to the accumulating pick-up-sticks confusion.

Michel (Denis Ménochet), Alice’s husband, returns home with a smashed-up face. We learn that Evelyne was having an affair with a waitress named Marion (Nadia Tereszkiewicz) and that it wasn’t going that well. Eventually we discover that Michel is in digital communication with a swindler in Africa. Aha!

Most of the picture deals in atmospheric chicanes around the nocturnal lanes of a forbidding French countryside. Moll shoots cautiously with mysteries edging themselves just outside his elegant frame. Few will complain about the delicious perplexities of the opening hour. The film’s focus on the sadness of remote lives – everyone here seems alone – adds satisfactory emotional ballast.

When, however, the mysteries begin to solve themselves, we fall back on a few too many coincidences and at least one preposterous leap into the fantastic. These jolts are not severe enough to derail a smooth-running machine, but you may like to take a few Dramamine before the last act begins.

Streaming on Curzon Home Cinema from May 29th

Black Water: Abyss – The first cinema release in months. It must be a great movie, right?
Real news has value SUBSCRIBE