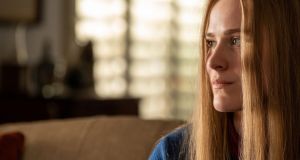 KAJILLIONAIRE ★★★★☆
Directed by Miranda July. Starring Evan Rachel Wood, Richard Jenkins, Debra Winger, Gina Rodriguez, Mark Ivanir. 12A cert, limited release, 104 min
July, innovative artist and director, delivers her most accessible work yet with this study of a miscreant family – grifters all three – who come across a little like a millennial cult. Mum and dad (Winger and Jenkins) have done for the daughter (Wood) with petty crime just as more conventional families do for theirs with private schools and social conditioning. As Philip Larkin would no doubt conclude, they may not mean to, but they do. Just when you think it’s got too arch for words, Rodriguez arrives to introduce everyday humanity. DC

Sir David begins his “witness statement” among the crumbling buildings of Chernobyl. One might reasonably expect a sombre Old Testament prophecy of ecological apocalypse. There is a fair bit of that, but Attenborough is also here to offer hope. Accompanied by images from his classic series, the veteran talks about education, health care and renewable energy. “We have come this far because we are the smartest creatures that have ever lived,” he says. “But to continue we require more than intelligence. We require wisdom.” There is much of that here. DC

A playwright (Blank) hits a midlife crisis and decides to reinvent herself as a rapper. She channels her frustrations into recording a mixtape with a sage engineer and DJ named D (Benjamin). Her scathing rhymes – performed under the Autobot salute “RadhaMUSprime” – satirise the gatekeepers and their post-Hamilton expectations. This is a remarkable and wildly entertaining showcase for Blank, who is terrific company whether she’s exploding the Magical Negro trope or holed up in her apartment wondering why she can’t be an artist. TB

Doting mother and geneticist Isabelle (writer-director Delpy) is raising her only daughter, Zoe, with her toxic, controlling ex-husband (Armitage). One tragedy later and Isabelle is on her way to Russia to see a renegade fertility physician (Delpy regular Brühl). Ridiculous, unethical developments ensue, all of which are neatly sewn up faster than you can say “but what about nature versus nurture?” Delpy, for all her indie chops, is a movie star. And her luminosity just about carries the silliest scenes. TB