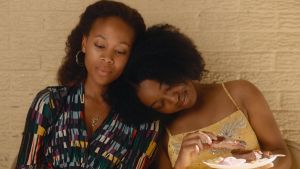 The Juneteenth holiday, celebrating the emancipation of US slaves, gathered worldwide attention this year when Donald Trump announced – either clumsily or provocatively – that his notorious Tulsa rally would take place on that day (it was subsequently shifted by 24 hours). More than a few commentators outside the country learned something that week.

There is more to be gathered in Channing Godfrey Peoples’ nicely balanced – if somewhat clunky – family drama set among an African-American community in Texas. The film buzzes with life and sincere feeling. The performances resonate like a struck bell. But a few too many questions are left unasked.

After spending time as a stripper, Turquoise has ended up working in a bar and as a part-time mortuary beautician. She maintains an on-off relationship with Kai’s only modestly supportive father (Kendrick Sampson) and works to control her dangerously alcoholic mother (Liz Mikel).

Reasonably enough, Turquoise believes that her daughter can succeed where she failed. Despite the teenager’s forceful objections, she is enrolled in the Miss Juneteenth pageant, brought to etiquette classes (really?), fitted for a dress and encouraged to learn a party piece.

The script takes us through the ups and downs of that preparation. Dad fails to pay for the gown. Mother and daughter settle on a Maya Angelou poem for the performance segment. Tension doesn’t exactly build, but we do get some feeling for the dynamic of an African-American community on the edge.

Turquoise is clearly a person of some intelligence and imagination but, when she hit an early bump, there was no support structure to get her back on the road. Elsewhere in the neighbourhood, a bar owner risks bankruptcy due to medical expenses.

Shooting in and around Fort Worth, cinematographer Daniel Patterson makes evocative use of bustling nightlife and shimmering daytime heat. The heart of the film remains the relationship between Turquoise and Kai. Peoples, whose screenplay draws on her own experiences, cranks up just the right amount of tension. The older woman’s urge to drive her daughter is partly selfish – an attempt to correct her own perceived failures – but is also rooted in sincere affection and concern about an uneasy future. Both actors knock their respective balls out of the park.

For all its virtues, Miss Juneteenth, a hit at Sundance earlier this year, is (both literally and figuratively) a bit lacking in grit. This is a tale of hard times told in the language of a wholesome family drama. Many overseas viewers will, moreover, be puzzled by the failure to engage with the mild ickiness of the central concept. The issue is not so much that the characters never ask whether teenagers should be parading around in (admittedly chaste) parody of grown-up beauty contests; it is that the film itself never raises those questions.

After all, there are answers here. When Kai is shown photographs of previous winners – a “civil rights activist” here, a “neurosurgeon” there – we understand that, in a racist society, this scholarship may be the only route to such success. But nothing in the framing or editing suggests the filmmakers feel any unease at the pageant format (there is an interesting contrast with the controversial, more dangerous Cuties here).

If we were being cultural bigots we could just say “well, Americans are different” and move on, but we do still have The Rose of Tralee. Let they who are without sin…

Available to stream on September 16th

The Darkness Echoing: How the past is politicised and marketed
10 Tribunal is a public inquiry, not criminal trial
Real news has value SUBSCRIBE