About Endlessness, How to Build a Girl, Queen of Hearts, Luxor, Nova Lituania 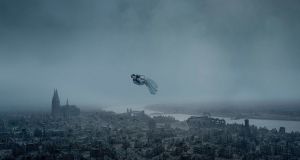 ABOUT ENDLESSNESS/OM DET OÄNDLIGA ★★★★★
Directed by Roy Andersson. Starring Bengt Bergius, Anja Broms, Marie Burman. Curzon Home Cinema, 76 min
A father tying his daughter’s shoes in the rain becomes a near Sisyphean labour. Two high schoolers read the first law of thermodynamics from a physics textbook. Noting that energy cannot be created or destroyed but only converted into new forms, the two debate whether they will meet again as potatoes or tomatoes. He may not be cinema’s most prolific presence, but Swedish auteur Roy Andersson remains one of the most influential directors alive. His films are life – not as we know it, and yet precisely as we experience it. TB

Feldstein’s Wolverhampton accent isn’t always spot-on but her warm, wide-eyed performance in this adaptation of Caitlin Moran’s autobiographical bestseller is, in every other respect, flawless. Graduating effortlessly from the likeable sidekicks found in Lady Bird and Booksmart to charismatic leading lady, Feldstein is the cement that holds the girl-building of the title. Screenwriter Moran preserves her trademark zingers and cheerfulness throughout the lively script. How to build a girl? It takes a lot of mess and patience and fun. But she’ll get there. TB

Taking a leaf from a playbook previously thumbed by Suzanne Bier, Queen of Hearts masks overheated melodrama with cool Scandi tones and an icy sociopathic turn from Dyrholm. The Danish veteran is as elegant as the wall-to-ceiling glass-paneled interiors even while the plot – glamorous, predatory lawyer has an affair with troubled teenage stepson – screams daytime soap opera. Bourgeois tropes (kicked off high heels, evening white wine) rub against implausibilities to absurd, queasy, and absorbing effect. TB

A straight companion piece to Hong Khaou’s meditative Monsoon, Luxor offers a strange marriage of travelogue, PTSD, spirituality, and something like romance. Set against the backdrop of the Egyptian of the title, writer-director Durra’s second feature concerns Hana, a weary British aid worker seeking respite after a stint at a clinic on the Jordanian-Syrian border. Riseborough, versatile enough to play both Maggie Thatcher (The Long Walk to Finchley) and an IRA activist (Shadowdancer), here works in small movements from under a stricken, frozen frame. TB

It’s 1938 and the youngling Lithuanian state is marking 20 years of independence against an increasingly dicey European backdrop. War looms and, in a stroke of spectacular misfortune, border guards shoot a Polish soldier. News of this powderkeg situation reaches fictional President Palionis (Masalskis) as he is dispensing sabres and patriotic words at a military academy graduation. On a nearby university campus, a geographer Feliksas (Kazanavicius) has come up with a novel – or possibly bonkers – safeguard against would-be invaders. Sharp odd satire inspired by a genuine historical incident. TB