On the Rocks, Rebecca, Summer of 85, The Secret Garden 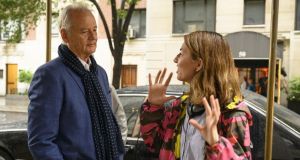 ON THE ROCKS ★★★★☆
Directed by Sofia Coppola. Starring Rashida Jones, Bill Murray, Marlon Wayans, Jessica Henwick, Jenny Slate, Barbara Bain. Apple TV, 96 min
Coppola again casts Bill Murray as a reprobate escorting a younger woman about one of the world’s great cities. The dynamics are otherwise very different to her Lost in Translation. Felix (Murray) and Laura (Jones) are father and daughter. She entertains a spark of suspicion that her husband (Wayans) is being unfaith. Her incorrigible das fans that spark into a flame of jealousy. On the Rocks lacks a bit of momentum, but nothing can dull the pleasure of seeing these two fine performers trade blows. Lovely New York locations. DC

Can we avoid the word “pointless” when discussing Wheatley’s unengaging disinterment of Daphne du Maurier’s most durable melodrama? It seems not. You know what happens. The unnamed heroine (James) falls for a grumpy widower (Hammer) and gets lured to his Cornish mansion. The eponymous Rebecca, Max’s late first wife, still looms over the pile. Hammer isn’t angry enough and James fails to shake off the 21st century. KST is barely trying as the famously sinister Mrs Danvers. Bland, glossy and, yes, pointless. DC

Alex’s boat is capsized by a storm but ripped white knight David sails to the rescue and brings Alex home to be towelled down by David’s dotty mother (Bruni Tedeschi). The two teens are soon spending every hour together, riding around on David’s motorbike, visiting the funfair and working alongside one another in David’s family shop. Lefebvre and Voisin are stars in the making. It couldn’t be further from the gravitas of the director’s 2019 clerical abuse drama By the Grace of God, but Summer of ‘85 is a pleasing Ozon doodle nonetheless. TB

Latest adaptation of Frances Hodgson Burnett’s classic about a lonely child who finds a place of escape. Any version of The Secret Garden is better than none, and while this latest iteration is lacking in grief and Gothic, it’s a pleasing old-fashioned family film bolstered by lovely performances. Dixie Egerickx, the young star of The Little Stranger and Patrick Melrose, once again proves that she’s a force to be reckoned with, even if her character isn’t nearly porcine enough. Nothing much new, but worthwhile. TB