Australian actor on LA, auditions, shirts in her car boot and her latest film Relic 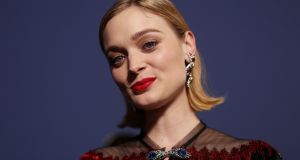 Bella Heathcote: “I came to LA and even though you are unemployed, it feels more meaningful because you have meetings every day.” Photograph: Don Arnold/WireImage

To date, Bella Heathcote has worked with writer Bret Easton Ellis and directors Tim Burton, Nicolas Winding Refn and David Chase. She played Christian Grey’s crazed ex-girlfriend in Fifty Shades Darker. She has been the much younger screen love interests of Hugh Grant and Johnny Depp. And she has essayed Olive Byrne, the polygamous real-life inspiration for Wonder Woman.

One might reasonably assume that she’s one of America’s most promising young actors. But the Melbourne-born star isn’t remotely American; she’s one of a blossoming community of imports who seldom use their own accents on screen. Lockdown, she notes, has entailed walking, banana-bread baking, 27 new hobbies, and, of course, five hours of daily dialect work.

“I just did Strange Angel for TV with Jack Reynor, who is Irish, and Rupert Friend, who is English. And Greg Wise is also English,” says Heathcote. “So there weren’t any Americans in the lead roles. I’m quite scared that the Americans are going to realise this and turn around and say piss off and stop taking our jobs.”

In Australia, I was working in a law firm and going to drama school at night, getting maybe one audition a month

In common with fellow Hollywood Aussies Chris Hemsworth and Margot Robbie, Heathcote served her acting national service on the soaps. In 2009, she was cast as unrepentant bully Amanda Fowler on Neighbours.

“I had auditioned for Neighbours before and didn’t get it,” she recalls. “I came back years later and thought: ‘Oh God, I’m too old for this; I’m not gonna get cast as a schoolgirl. Because I was 21. I remember borrowing a family friend’s daughter’s school uniform to wear to the audition. Somehow that worked out. And it was so much fun getting to be the Neighbours school bitch.”

Heathcote quickly relocated to Los Angeles in search of work and found herself eating lunch in her car, running into FedEx branches in order to print out pages for whatever happened to be the next audition, and keeping a trunkfull of clothes so that she could age up or down.

“In Australia, I was working in a law firm and going to drama school at night, getting maybe one audition a month,” says the 33 year old. “All my hopes and dreams were pinned on those monthly auditions. There was so much pressure to succeed and I just bombed all of them.

“I came to LA and even though you are currently unemployed, it feels more meaningful because you have meetings every day. So it feels like something is happening. Even though I look back now and remember frantically trying to think what accent I needed to do today and wondering if I had a shirt that made me look like a 34-year-old lawyer even though I looked 12.”

It helped that Heathcote became a recipient of a Heath Ledger Scholarship on the day she arrived in LA. The late actor’s family, she says, “were just so generous and supportive”. It also helped that within months she landed the dual roles of Victoria Winters and Josette du Pres in Tim Burton’s starry adaptation of Dark Shadows.

“On one of the very first days, we did the cast photo; the one that they cobbled from for the film’s poster,” says Heathcote. “So I’m standing with Johnny Depp, Helena Bonham Carter, Michelle Pfeiffer, and Eva Green. That definitely spun me out.”

She has been kept busy ever since, landing high-profile parts as Jane Bennett in Pride and Prejudice and Zombies and as the glamorous Nazi propagandist Nicole Dörmer in Amazon’s alternative history drama The Man in the High Castle. Upon landing the role, the first person she called was her secondary school German teacher.

“It’s so funny for me because I was a bit like the toad in the pot,” says the actor. “During the first season I remember thinking: she’s just a woman living in a world run by Nazis. She’s ambitious and opportunistic like Leni Riefenstahl was. But she’s not really into the party or the ideology. She’s just doing the best we can given the circumstances. And then I got the script for the second season.”

Heathcote has recently returned to her native Australia for Relic, one the year’s best reviewed horror films and a picture that has earned favourable comparisons to Hereditary and The Babadook. Natalie Erika James’ feature debut marries haunted house tropes with fractured mother-daughter and a grand metaphor as the isolated house in which the film is set takes on the symptoms of Alzheimer’s. Writer-director James drew on her own experiences of caring for her mentally declining grandmother as she wrote the screenplay, and that personal sense of horror tells in every spooky sequence.

“I lost my mum when I was young, so for me to stand in a set by myself being all messed up and wet and falling apart and screaming ‘Mum’, well, that taps into something pretty obvious,” says Heathcote. “And in the first scene we shot, the walls were literally closing in on me. So I didn’t feel like I had to do that all that much heavy lifting as an actor. It was terrifying and I was just responding accordingly. The set designers did the work for me.”

Adding to the sense of dread, much of Relic was shot in a real-life spooky house with no running water and plenty of decaying facades.

“It was a really creepy house,” says Heathcote. “It was in an affluent neighbourhood but the person who was living there had inherited it, I think, and was living in it like it was a squat. The electricity was really suss and we had to bring our own exterior power sources. It was full-on. Like living in an episode of Hoarders.

“Between that and the emotional weight, I remember Emily and I standing there wondering why we are doing this to ourselves. We had to remind each other that we loved the people involved and we loved the project.”

Relic is released on October 30th