Fight Club at 20: A vision of Trump’s United States 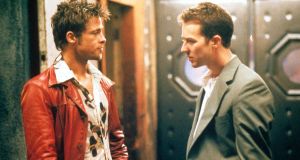 When Fight Club was released, 20 years ago, it was a crystal ball that was mistaken for a cultural crisis, much like Do the Right Thing had been a decade earlier and perhaps Joker is now.

Film-makers who were trying to identify a violence nesting in American culture were accused of trying to incite it – or at least clumsily juggling lit sticks of dynamite. No less an authority than Roger Ebert opened his review of David Fincher’s film by calling it “the most frankly and cheerfully fascist big-star movie since Death Wish”, echoing widespread concern that impressionable men would lock into the empowering brutality of Tyler Durden and the army that gathers around him. Viewed from a certain angle, it looked like a recruitment film.

What cannot be predicted, however, is how items like Fight Club will shift during flight. It becomes easier to appreciate the ambiguities of the film when it no longer feels like a clear and present danger. That doesn’t necessarily mean that Fincher’s point of view isn’t confusing or contradictory all these years later, but the culture tends to move quickly from threat to threat, and it’s helpful to have enough distance to see the world it’s depicting more clearly. Whatever you think about Fight Club in 2019, it’s probably not exactly what you thought about it in 1999, if only because so much of what it describes has manifested itself in the real world or been distorted beyond recognition.

Let’s begin at the end, as the film does, when a series of detonations leads to the collapse of downtown office buildings. It wouldn’t even be two years later that a terrorist cell would bring down the World Trade Center towers, those symbols of American financial might, and the motives of al-Qaeda and the film’s Project Mayhem are not that dissimilar. Both were attacking the soft centre of the United States as they understood it, except in Fight Club the idea was to raze the country and start over, because consumerism had anaesthetised it and hollowed out its soul.

The final image of two people holding hands as the Pixies’ Where Is My Mind? blares on the soundtrack could be seen as nihilistic, but it’s secretly thrilling to imagine the possibilities of starting over after a hard reboot. (It also helps to know that the explosions are about taking down institutions, not people, more The Weather Underground than Osama bin Laden.)

It all begins, as many terrible things do, with the pissy aggrievement of a young white male. Much like Ron Livingston in Office Space, another cult classic from the same year, Edward Norton’s unnamed narrator has tired of the deadening routines that define his life. The difference is that what’s bothering Norton isn’t cubicle culture alone but also his realisation that he’s a cog in a terrible corporate machine.

His day job is to calculate the necessity of automobile recalls under a formula: “Take the number of vehicles in the field A, multiply by the probable rate of failure, B, multiply by the average out-of-court settlement, C. A times B times C equals X. If X is less than the cost of a recall, we don’t do one.”

Many of his later actions are explained by the emptiness of being defined by the things he buys – most famously, the Ikea catalogue that accounts for the interior of his apartment – but his work matters, too. He knows first-hand that capitalism will let people die if it’s better for the bottom line.

What are the Proud Boys if not a roving gang of Project Mayhem thugs? Or the tiki-torch-bearers of Charlottesville? Fight Club saw it coming

The Narrator’s need to feel something at all draws him first to terminal-disease support groups at the local Episcopal church and later to the anarchist philosophy of Tyler Durden (Brad Pitt), who makes him feel the old-fashioned way – by punching him hard in the gut. The twist of Tyler’s true identity – fully earned, incidentally, by the many times Fincher hints at it – says a lot about the conversation the Narrator has with himself about what he thinks he needs and how it develops into a messianic vision that completely gets away from him. But those first punches are an expression of brute masculinity that hit him like a cold splash of water to the face. Men are simple creatures in that way.

As the fight clubs metastasise around the United States, Tyler’s prebrawl speeches shift from stating the rules to spouting off about his generation being “the middle children of history”, without a World War or a Great Depression to give it purpose. (“Our Great War is a spiritual war,” he says. “Our Great Depression is our lives.”) The implication is that all that masculine energy needs an outlet, and as Generation X hasn’t been provided with one, it will have to find some other way to channel its inchoate rage. And it’s here where the film’s meaning can get a little slippery: how much of what Tyler is saying is to be understood as nonsense? And if it’s not nonsense, then how much does the film implicitly endorse?

The fact that the fight clubs lead into Project Mayhem, a full-on terrorist organisation, should lay the second question to rest. In his efforts to satisfy a personal need, the Narrator/Tyler has set off a bush fire that rages out of control, and he’s powerless to keep it from consuming the world. Working from Chuck Palahniuk’s novel, Fincher and his screenwriter, Jim Uhls, only identify with their hero(es) up to the point when the Narrator/Tyler still has some control over the situation.

The film does recognise a phenomenon where men are waking in anger from a culture intended to numb or emasculate them, but it also sees in that the presence of sickening misogyny and the potential for fascism. And, contrary to Ebert’s review, it panics right alongside the Narrator, who goes so far as to shoot himself in the head to stop it.

What Fight Club missed in 1999 – and comes oh so close to getting – is how much the rage it identifies is connected to white supremacy. But the world it anticipated is now upon us, with a host of Tyler Durdens marshalling attacks on perceived enemies and twisting the meaning of “snowflake”, a term used in Palahniuk’s book and popularised in the movie (“You are not a beautiful and unique snowflake”), to taunt the vulnerable. What are the Proud Boys if not a roving gang of Project Mayhem thugs? Or the tiki-torch-bearers of Charlottesville? Fight Club saw it coming, with thrilling vividness and wit and technical panache. Just don’t shoot the messenger. – Guardian