Lost Lives: Every story is a fresh horror, exhumed

Review: This chronicle of the 3,700 killed in the Troubles is a sobering, triggering reminder 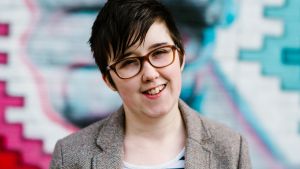 Released during the same week that Arlene Foster claimed that the Good Friday Agreement is not a “sacrosanct” piece of legislation, Lost Lives is a sobering, triggering reminder of the bad old days.

The film, an adaptation of the book Lost Lives: The Stories of the Men, Women and Children who Died as a Result of the Northern Ireland Troubles, a unique 1999 chronicle of the 3,700 killed in 30 years of the conflict, was written over seven years by five journalists: David McKittrick, Brian Feeney, Chris Thornton, David McVea and the late Seamus Kelters.

Many talented actors solemnly intone – there is no other way – the awful details. Archive footage is poignantly employed. Shots of the grieving mother of Malcolm Orr, 20 years old, and his brother Peter, 19 are unbearable. The siblings’ bodies were found off the main road leading to Belfast: it is believed they were killed as they were dating Catholic girls.

There are a great many children killed. One is as young as one-year-old when a bullet passes through her seven-year-old sister’s dress and into a baby who is learning to walk. Another was found with a hood over his head before his parents reported him missing; last seen on the way to band practice. His Jewish uncle subsequently wrote a letter to the local newspaper, noting that he had lost a cousin in similarly horrendous circumstances during the Final Solution.

There are tiny, lovely details about the dead. Anna O’Brien’s father recalls the “few strings of a jumper” left on her corpse.

Brian McKinney, whose body was discovered in Monaghan in 1978, was 14 when a doctor diagnosed him as having the mind of a six-year-old. Fourteen-year-old Julie Livingstone, shot dead by the British army the day Francis Hughes died in jail, in order to quell unrest.

A framing device which utilises a “book of the dead” ends with Lyra McKee.A beautiful score performed by the Ulster Orchestra, and punctuated by evocative vocals, adds to the impossible sense of sadness.