Do the Right Thing: Come for the politics, stay for the energy

Review: Previous ranting about the film nudging black audiences towards violence now sounds like so much gibberish 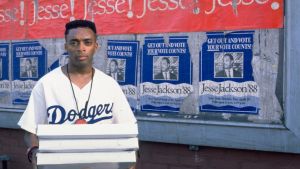 Film Title: Do the Right Thing

What’s changed since, an implausible 30 years ago, Spike Lee’s Do the Right Thing was released to acclaim and controversy? “Not enough,” Spike would almost certainly respond. Still, this is a different planet. Though Bedford–Stuyvesant remains an African-American hub, gentrifying cheesemongers have taken over neighbouring swathes of Brooklyn. The US has had a black president. And Spike Lee has finally won a competitive Oscar.

There would still be much hand-wringing if such a picture was released today – we have social media, after all – but there would be even more balancing good sense. This is a film that allows a multitude of interpretations. Hanging round a Bed Stuy neighbourhood on the hottest day of the year, the picture takes us through the simmering discontents that lead eventually to something like a riot. The director plays Mookie, a pizza deliveryman. Danny Aiello is the pizzeria’s irascible owner. John Turturro is his racist son. A tragedy in the final act persuades Mookie to do what may be the wrong thing for what are probably the right reasons (or vice versa).

All the ill-thought ranting about the film nudging black audiences towards violence now sounds like so much gibberish. “That still bugs the shit out of me,” Spike said just a few years ago. “I don’t remember people saying people were going to come out of theatres killing people after they watched Arnold Schwarzenegger films.” White kids really did tear up the seats after the cheap-ass Rock Around the Clock (which introduced this dangerous “rock ‘n’ roll” craze to everyday audiences), but no sane person watching Do the Right Thing (which belatedly introduced this dangerous “hip hop” music to arthouses) could mistake it for anything other than a balanced, thoughtful study of continuing misunderstandings. Both Martin Luther King and Malcolm X get a nod at the close.

Do the Right Thing failed to get a best picture nomination in the year that Driving Miss Daisy won. That probably wouldn’t happen now. Then again . . .