Elizabeth McGovern: A lifetime of living and acting with alpha males 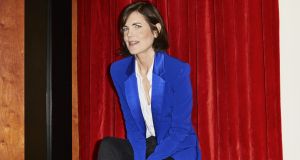 Elizabeth McGovern: ‘I did feel like a fish out of water for a long time. I don’t anymore.’ Photograph: Aaron Richter/New York Times

The British period drama Downton Abbey launched in a nice teatime telly slot on ITV in 2010, looking decidedly out of place on a medium then defined by such robust characters as Tony Soprano, Mad Men’s Don Draper, or Breaking Bad’s Walter White.

At a moment when a global financial crash saw thousands of people losing their homes, Julian Fellowes’s anachronistic interwar-set creation required an audience to empathise with Lord and Lady Grantham (Hugh Bonneville and Elizabeth McGovern, respectively), their family, and their complicit staff as they pottered around a premises the size of small principality, practically drowning in privilege.

Within two years, Downton was a phenomenon in the UK and a hit in more than 100 other territories. American audiences, in particular, showered the very British saga with love. Downton became the most-watched TV series in the history of the PBS network, achieving figures for its sixth season (9.9 million viewers for the series opener) that greatly eclipsed such big watercooler moments as the Mad Men finale (4.6 million).

It hoovered up awards, including a Golden Globe for Best Miniseries or Television Film, and a Bafta and a Primetime Emmy Award for Outstanding Miniseries. After just two of its six seasons, Downton had earned more nominations than any other international television series in the history of the Primetime Emmy Awards.

Nobody saw it coming, least of all Elizabeth McGovern.

“Oh my God!” she says. “No one knew. Who would have thought it? I mean, you fantasise that outcome about everything you ever do. You want that. But you don’t really expect it to happen. It just doesn’t happen.”

Sitting in skinny jeans and high-heel shoes with a black feather trim, in person McGovern looks rather more like her rock mom alter-ego (she has fronted the pub band Sadie and the Hotheads since 2008) than Cora Crawley, Countess of Grantham.

She has, nonetheless, dusted off her tiara, some four years after the final episode aired, for a new Downton Abbey feature film in which series regulars, including Maggie Smith, Allen Leech and Michelle Dockery, return to flap and panic in anticipation of a visit from King George V (Simon Jones) and Queen Mary (Geraldine James).

“It felt very natural and easy to go back to the character and back into everything and to see everyone again,” says McGovern. “But there were obviously a lot of nerves about it, because there’s so much expectation attached. I mean, if I were Julian, my own instinct would be to run away from that expectation, because no one will be happy with whatever we could come up with as a movie. But it feels, so far, like we have given the fans what they wanted, which is the characters they love, played by the actors they love, all shot lovingly. All we can hope for is that it will satisfy the people who are invested in the show. That’s our ambition for it.”

There’s a lot to be said for the monarchy. I think we’re seeing that now because the political system is so flawed

As a viewer who, watching the fantasy aristo-porn of Downton Abbey, occasionally pines for a guillotine subplot, I do wonder if the Illinois-born and California-raised McGovern has similar misgivings about the class system underpinning the project?

She smiles and mouths the words “me, too”. She speaks carefully and diplomatically, as if any of her words might set off a landmine.

“It’s complicated,” she nods. “I have a very complicated relationship with it because I do see that there’s a lot to be said for the monarchy. I think we’re actually seeing that now, in particular, because the political system is so flawed. So when you have this idea of an eternal monarch that exists outside of the fray of the political system, that has a value. I probably have a different perspective than the cast who have grown up within that system. But I do come to it very much as an American and a republican in my bones. So it’s still very mysterious to me.”

When the teenage Elizabeth was spotted by an agent in a stage production of Thornton Wilder’s The Skin of Our Teeth, no one in the family knew what to expect.

“I think they were so naive about it,” she says, “They were probably worried but it was a world they knew nothing of. The thing about my parents is that they literally never, ever watched movies. That seems really strange given that I grew up in LA but I swear it’s true. I think they had faith that everything would be fine, which was nice for me, because I inherited the same faith. I think I just saw things the way I wanted to see them and I think there’s something to be said for that.”

“I was absolutely terrified,” says McGovern. “But the thing about those sort of personalities is that they’re so good at what they do and they have so much confidence – people like Robert Redford and Mary Tyler Moore don’t need affirmation – so once you’re in their world, you get on with your job because they’re getting on with their job. The thing about this life is that the terror never completely goes away. I probably had the same degree of terror going up the drive to do the first scene with Maggie Smith on Downton Abbey. You have to just keep terrifying yourself over and over and over. I hate it and I love it.”

At least we’re talking about the fact that it’s a male-dominated industry, and talking honestly about what goes on

It would be impossible to overstate McGovern’s celebrity during the 1980s. In 1981 she earned an Academy Award nomination for Best Supporting Actress for her work on Milos Forman’s Ragtime.She headlined the John Hughes comedy She’s Having a Baby alongside fellow 1980s superstar Kevin Bacon. Her other leading men on screen included Mickey Rourke, Steve Guttenberg (an 80s must), Brad Pitt and Sean Penn; she was engaged to the latter for two years, pre-Madonna, a relationship she has characterised as “exhausting”. That’s a lot of alpha males. Does she remember it as a more macho industry back then?

She nods, thoughtfully. “At least we’re talking about the fact that it’s a male-dominated industry. At least we’re talking honestly about what goes on. When I think back – and this is true for a lot for a lot of women in my generation – we accepted the way things were without question. My daughters never would. So things have changed and women have a different set of expectations because of the dialogue that has opened up. I’m so pleased about that. I saw a lot of behaviours and it never occurred to me to question that. It’s hard to understand how much we’re brainwashed by our own culture.”

At 23, McGovern starred in Sergio Leone’s gangster epic Once Upon a Time in America as Robert De Niro’s romantic interest. It was the Italian auteur’s final feature film.

“I didn’t realise how lucky I was,” she says. “I came in at the end of an era. They don’t really make those kind of films anymore. I think back on that with a lot of nostalgia and sadness. I always try to look to the future, embrace what is happening now, which in many ways is really exciting. But those sorts of visionary, idiosyncratic directors like Sergio Leone creating stories about people as opposed to superheroes, they just don’t exist anymore. So it was a very special time.”

In common (almost) with her Downton Abbey character, McGovern is an American in London. In 1992, she married up-and-coming British film director and producer Simon Curtis (who would later direct My Week with Marilyn and The Art of Racing in the Rain) and they relocated to the UK, she pregnant with the first of two daughters. It was a culture shock at first.

“I did feel like a fish out of water for a long time,” she says. “I don’t anymore. I really love it here. It’s my natural habitat. In fact, psychologically I feel more at home here than I do in America. That took a while. But I slowly realised it suited me more than the culture that I grew up in.”

“Well, it’s funny. What we realised – because my husband is Ashkenazi Jewish – is that even though he’s very English, I’m more English than he is. We all forget just how young America is. And we forget that we are all interlopers – it just depends on how far back you want to go.”

‘The Hist’: 250 years of self-indulgent theatrics and transformative debate
10