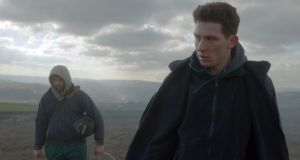 Let us get the awkward question out of the way first. When Francis Lee conceived of God’s Own Country, a beautiful, raw love story set in rural Yorkshire, he must have suspected that we lazy journalists would compare it to Brokeback Mountain. I’ve done so already.

The picture follows a young, inarticulate farmer as he falls for a visiting shepherd from Romania. The tone is rougher and rawer than that of Ang Lee’s film. The humour is more pungent. The weather is much worse. But these are still two films about gay men falling for one another among remote livestock.

“I knew it was a very different story. But, yes, I knew that the comparison would be made. Hand on heart, it’s a lovely compliment. Brokeback Mountain is a masterpiece, and the performances at its centre are heartbreaking. It’s lovely that people see my film and say, ‘I thought it was going to be like Brokeback Mountain, and then it’s so different.’ But I never consciously tried to make it different, either.”

Pundits have also decided that God’s Own Country is an autobiographical work. This is not quite true, either. A former actor with clean, precise diction, Lee did indeed grow up the son of farmers from that windy part of northern England. But he stresses that the incidents in the film are not drawn from his life. The young hero, played with buttoned-down intensity by Josh O’Connor, is not a version of the director.

It’s about how the landscape informed me both emotionally and physically. I also wanted to make a film about how we make ourselves vulnerable to love

“None of the characters are me, and the family represented aren’t my family,” he says. “But the starting point, and what really inspired the film, was the landscape. It’s about how the landscape informed me both emotionally and physically. I had never really seen the landscape depicted as I saw it. That’s the main biographical element. I also wanted to make a film about how we make ourselves vulnerable to love.”

“I wasn’t a very good actor”

Lee speaks with some diffidence about his time as an actor. After school in Wakefield, he made is way to Rose Bruford College, in south London, the drama school that gave the world Gary Oldman, Tom Baker and Nerys Hughes. His Internet Movie Database page references turns in A Touch of Frost, Casualty and Heartbeat. From the early 1990s onwards he was a regular supporting presence.

“I didn’t know anybody who was an actor or who had worked in the arts or anything,” he explains. “So I felt I had to go to drama school. My parents were incredibly supportive. But I was lucky. I wasn’t a very good actor, and I never felt particularly comfortable with it. I never felt I was really nailing it. And I always knew I wanted to direct.”

So was the idea for God’s Own Country nagging away at him for 20 years? That’s a long time to spend nurturing a cherished project.

“I escaped London at 20, but I never really felt I fitted in there. I’d go home and see that landscape through different eyes. I was always thinking about that. It felt like a natural step.”

The two men are seen delivering lambs in the most rudimentary of circumstances. Josh O’Connor gets his arm shoulder-deep in a cow’s bottom

Lee eventually got around to making his first short in 2011. A pal secretly sent the script for God’s Own Country to an agent, who fell in love with it. After some wrangling the British Film Institute came up with the funding, and earlier this year the picture played to great acclaim at the Sundance Film Festival. It was the only UK film to make it into the world drama competition at that event.

Lee is right to stress the film’s connection with the landscape. Few other movies have so fluently communicated the harshness of rural life in contemporary England. The two men are seen delivering lambs in the most rudimentary of circumstances. O’Connor gets his arm shoulder-deep in a cow’s bottom.

“My dad is a sheep farmer, and his farmer friends were always on board to help. We shot the film on a friend’s farm in the middle of lambing season. I knew I never wanted a hand double or a stunt double. I sent the actors off to work on farms. They were doing shifts from six in the morning until seven at night. They learned everything. They became so proficient that it was second nature. That aspect ended up being not so hard. The hardest aspect was the weather.”

All families of films gather cliches about them. We have come to expect movies telling gay stories from less metropolitan areas to engage with homophobia. That’s fair enough. Such prejudice happens. It is, nonetheless, refreshing to encounter a picture that doesn’t worry itself with those rites of passage. A lot is unsaid in God’s Own Country. Accommodations are made in unlikely places. But the expected clash of values never quite happens.

The film is impressively disciplined in its dialogue. Nobody says any more than they need to. This surely reflects how the good people of Yorkshire go about their business, but it also grants the film a welcome purity. Scored to occasional throbs from the ambient masters A Winged Victory for the Sullen, the film conveys all it can through image and as little as possible through the word.

I knew how difficult it is to make yourself vulnerable in front of the camera. And so I was able to know what they are going through

“I love visual storytelling,” Lee says. “I am not a great fan of telling stories through dialogue. But also these people are not verbally articulate. And they show their love and how they feel through action. It already had very little dialogue in it. When we got to the edit we worked out we could get rid of even more. Every line of dialogue that appeared had to fight for its place.”

It must help that Lee started out as an actor. He understands the pressures of the business.

“Yes, having that experience meant that I knew how difficult it is to make yourself vulnerable in front of the camera. And so I was able to know what they are going through.”

God’s Own Country feels like the sort of film that launches a career. In recent years we think of British pictures such as Andrew Haigh’s Weekend or Clio Bernard’s The Arbor. It seems likely that Lee will soon be travelling on similar roads.

Is he able to say what?

The population of Yorkshire is only slightly smaller than that of Ireland. So we shouldn’t be surprised that it has given us many great films. We had to leave out The Full Monty, Billy Liar and The Arbor.

This Sporting Life (1963)
Lindsay Anderson’s tough film stars Richard Harris as a rugby-league player in the Yorkshire town of Wakefield. Angry and awkward. If it is a sports movie (arguable) then it’s one of the best.

Kes (1969)
Many pundits’ pick for the greatest British film. Ken Loach’s study of a Yorkshire childhood encapsulates an era and a place. Often funny. Almost unwatchably sad by the close.

Brassed Off (1996)
Or The Full Monty? Mark Herman’s comic drama set among the Grimethorpe colliery band is the more moving of the two. Ewan McGregor and Tara Fitzgerald form a lovely couple.

Wuthering Heights (2011)
Andrea Arnold’s raw, vernacular take on the great Yorkshire novel was released to some mixed reviews, but its reputation has grown in the interim. Gets closer to the grit of the story than any earlier version.