Is Tenet as good as Inception? Christopher Nolan’s films ranked

As Tenet arrives in cinemas, we judge how it compares with The Dark Knight and Memento 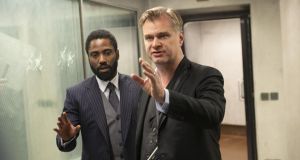 The ranking of Christopher Nolan films is an industry in itself. A director with a fanatical following, the Englishman hit the ground running with Memento, his first commercial feature, and continued to attract attention as the century unfolded. Not all the films hit the mark. But you are always aware you’re watching a singular aesthetic unfold. As Tenet arrives in cinemas, we add our own list to the expanding library of Nolan studies.

Nolan’s remake of Nikolaj Frobenius and Erik Skjoldbjærg’s Norwegian thriller — starring Al Pacino as a cop failing to sleep while investigating a murder in Alaska — has much to recommend it. But it doesn’t yell “essential” in the way even the director’s grander failures manage. As ever, Robin Williams is good in the creepy role. You are better off with the original.

10. FOLLOWING (1998)
Every second action director has made a surprising arthouse puzzler in their early days. Those hoping to discover an existential classic in Nolan’s no-budget debut may be disappointed. Shot in 16mm, this study of a destitute writer stalking strangers about the streets of London is spooky, squalid and efficient. But, like many films ultimately deemed “calling cards”, it lacks psychological depth. We calculate the budget of Tenet to be 37,500 times greater than Following’s $6,000.

The indomitable critic Kim Newman skewered the third of Nolan’s Dark Knight films when he noted that it shares a surprising number of plot points with the 1966 Adam West Batman movie. Remember West desperately trying to get rid of a big round bomb? That’s pretty much the last act of this muddled, over-stuffed blockbuster. As with so many Nolan joints, the picture contains unmissable set-pieces. The opening aerial heist is phenomenal.

Oh come on. Rarely has so much technological know-how been thrown at such a sentimental, philosophically hollow narrative. Large parts of the space epic argue for the power of the survival instinct. Others remind us that, well, all you need is love. One gets the sense of Nolan and his brother Jonathan – collaborating on the screenplay– flailing to fill up the vast running time with any available padding. Some good bits.

Nolan’s latest will always be remembered as the blockbuster that sought to restart the movie business after lockdown. The time-twisty thriller certainly makes the argument for the theatrical experience. We get an epic automotive robbery. We get glamorous high-end yachting. We get a closing battle that breaks new ground in creative cacophony. But what on earth is going on? The mess of McGuffins and misdirections will make sense only after three or four viewings.

Both Tenet and Inception make the case for Nolan being offered (or do we mean “accepting”?) a well-written James Bond flick. Like the later film, this epic thriller abounds with enormous action playing out to ear-splittingly Wagnerian chords. Leonardo DiCaprio, Cillian Murphy and Marion Cotillard accept the invitation to roll about in baths of cask-strength glamour. It’s a hoot. If only it had the uncomplicated discipline of On Her Majesty’s Secret Service (a film it conspicuously references).

Then still reasonably obscure, Nolan proved to be a brilliant choice for the latest incarnation of the caped crusader. We have since become very tired (very tired indeed) of superhero films that claim to be “darker”. But Batman Begins really did bring unexpected levels of neurotic imbalance to Gotham City’s best known have-a-go hero. Nolan’s hasn’t quite perfected his characteristic martial ballet. But the interplay between bat-guy Christian Bale and bat-mentor Liam Neeson is a delight.

One could put Dunkirk forward as evidence that Nolan’s high-volume cinema works best when contained within the least complex vessel. As ever, he plays around with time frames, but the action is inevitably tied to the evacuation of the retreating British army from France in 1940. We end with a hugely evocative recreation of the sounds and sights of an incident that has taken on the quality of myth. He perhaps overplays the flag-waving at the close — Elgar’s Nimrod? Really? — but it gets in your bones.

When The Dark Knight emerged it was hard not to be turned off by the legions of maniacs declaring it a masterpiece for the ages. Now the fuss has died down, we can confirm that few other superhero films have managed this degree of audio-visual heft. Heath Ledger was troublingly deranged as the Joker and fully deserved his posthumous Oscar. The script offers some genuinely worthwhile moral dilemmas. But it is the taste for urban spaces that really stays in the brain. Those wonderful gloomy canyons.

A particularly idiotic line of criticism points out that the story of Nolan’s breakthrough would be banal if relayed in linear form. So what? It’s not told that way. A sequence of black-and-white scenes is shown chronologically and a series of colour episodes is shown in reverse order. The technique offers audiences a puzzle — a fair one, unlike that in Tenet — as it helps communicate the psychology of a hero who has lost all short-term memory. Nolan would deliver more overpowering imagery, but he has not yet produced as tight and satisfactory a narrative. Guy Pearce and Carrie-Anne Moss are strong leads.