‘Saoirse Ronan is the greatest. We're such close friends’

‘Lady Bird’ was a big break for the US actor Beanie Feldstein, who will star in Caitlin Moran's ‘How to Build a Girl’ 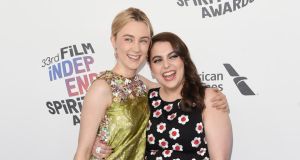 In media interviews, some rising stars tend to resort to weary ennui, or can barely suppress their wariness or nerves. It’s not every day you come across one as ebullient as Beanie Feldstein. Every sentence begins with a cheery, “oh absolutely!”, and she chats in the breezy tone of a teenager at a sleepover party. Everyone Feldstein has worked with is incredible, an inspiration, the best, or one of a dozen other superlatives.

No wonder the director Greta Gerwig decided to cast her as Julie opposite Saoirse Ronan’s heroine in last year’s Lady Bird; she does best friend like no other. Feldstein was already a huge fan of Ronan’s before she landed the part.

“I’d seen so many of her films and watched Brooklyn three times; I was obsessed with it,” says Feldstein. “When I found out about the part, I had to cut myself off, as I was only going to freak myself out too much. I was so excited and anxious to meet her, as she is one of the most remarkable actresses.”

Initially, Ronan and Feldstein met at Gerwig’s apartment for bagels and lox, along with their co-stars Lucas Hedges and Laurie Metcalfe.

“I was nervous, but then I instantly fell in love with [Ronan],” says Feldstein. “She was wearing these brightly coloured pants and just jumped into my arms and said, ‘Bean! I’m so excited to meet you.’ It gave me the chills. She is the warmest, most delicious person – so funny and smart.”

Working with the seasoned Saoirse prompted the relative newcomer to up her game on camera.

“I personally have been lucky to work with so many great people, but Saoirse was the most incredible scene partner. You go to your best when you’re surrounded by the best people.

“I knew I related to [the character] Julie and how exceptionally written she was, and how much I wanted to play her, but it was only when I met Saoirse that I knew, ‘You can do this,’” she adds. “You look into her eyes and you just know how to react. Watching her relate to everyone on set, you saw how kind, motivated and passionate she was.”

“She really wanted to fill out the world of the film in terms of it being Sacramento in 2002,” explains Feldstein. “Oddly, it felt like a period piece even though it’s fairly recent. Saoirse and I were only eight or nine in 2002, so we didn’t have too much of a cultural understanding of the time.

“Greta gave us the freedom to create and fill these girls,” she adds. “I met with the costume designer and instead of it being, ‘This is the look we’ve created for Julie’, it was more ‘What do you think your character would wear?’ I wore a locket throughout filming under the uniform that Greta and I agreed would be from her [absent] dad. No one would ever notice it, but it made her feel so much more real.”

And as best friends go, Julie is a more rounded character than most. At the film’s touching climax, it appears that Julie has privately been depressed.

“I was so nervous for that scene,” Feldstein says. “There’s this picture of me collapsed on Greta’s lap after I’d finished, just like a weight had been lifted, and she’s stroking my hair.”

Feldstein and Ronan’s authentic kinship was certainly writ large all over Lady Bird – the two spent much of the film intertwined in the special, intimate shorthand that girlfriends know. Have the pair kept in touch off-screen?

“Oh my God, we’re such close friends. She’s the greatest. I’ll get to see her this summer.”

Feldstein may only have had two films on her CV before she walked on to the set of Lady Bird (the ill-fated The Female Brain and Bad Neighbours 2). Yet scratch the surface and she is no one’s idea of a wide-eyed neophyte in the business.

Born in Los Angeles in 1993, Feldstein is the daughter of the costume designer Sharon Lyn and the music accountant Richard Feldstein. Her older brothers preceded her in showbiz. Jordan, who died suddenly in December 2017 of a blood clot, was the manager of Maroon 5. Her other brother, Jonah Hill, is the actor seen in dozens of blockbusters, among them Moneyball and The Wolf of Wall Street.

As a nine-year-old, she had a bit part in the TV series My Wife and Kids, as well as minuscule roles later in Madison High and Orange is the New Black.

For years, Feldstein pursued a career in musical theatre with a single-minded focus, but it was the part in Bad Neighbours 2 that convinced her, and others, that broad physical comedy could well be her forte.

After Lady Bird wrapped, Feldstein landed her dream role as the shopgirl Minnie Fay in Hello, Dolly! on Broadway, opposite David Hyde Pierce and Bette Midler.

“Truly, how much time have you got?” she says when Midler’s name surfaces. “I could talk about that woman for the rest of her life. Everything you want her to be, she is. She is a true firecracker, and she defines stage presence and what it means to be committed to a show. I have a secret desire to play Dolly when I’m 70.”

The new stage role meant that, as Lady Bird geared up for awards season and Ronan did the red carpet and late-night chatshow circuit, Feldstein was busy performing several shows a week on Broadway, as well as coming to terms with the sudden death of her brother. Eventually she got to experience an award ceremony when she joined her co-stars at the SAG Awards, wearing her high school prom dress by Kay Unger.

“I was able at certain points to miss a show to go be with Lady Bird, and it was a really crazy time,” she says. “Once I flew to the Toronto film festival and flew back up at 6am in time for the Saturday matinee [in New York].”

After shining in sidekick roles, Feldstein is now moving into the lead. And her first major project is a hot ticket: the film adaptation of Caitlin Moran’s novel How to Build a Girl.

“Screamingly excited,” tweeted Moran back in May. “Beanie is just astonishing. The world is going to explode with love for her.”

Feldstein was largely unfamiliar with Moran’s work when the role came along: “I’m sort of disappointed that I hadn’t read her stuff because I could have held her brilliance closer for much longer. Since I’ve gotten the role I’ve told everyone to read it and I’m continuing to spread the word. I’m so honoured they’ve asked me to be their Johanna more than anything.”

In the future, Feldstein would like a career like that of Laurie Metcalfe with a mix of theatre and screen work.

She also hopes to take on some of her dream musical roles, like Winifred in Once Upon a Mattress, made famous by Carol Burnett, and Mary in Merrily We Roll Along, which is the musical performed in Lady Bird. Though if she continues to make friends and influence people as she has done in the last year, Broadway will likely be the least of her work

Lady Bird is available on DVD and Blu-ray from today