Comedy has no barriers – but Corden’s Weinstein jibes were pathetic

Rather than channelling anger at Harvey Weinstein, he giggled like a schoolboy 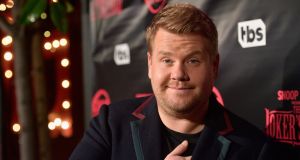 James Corden: his jokes were crass, ill-timed and delivered with little sense of respect. Photograph: Matt Winkelmeyer/Getty Images for TBS

No subject should be off limits to comedy. Is that so scandalous a notion? Let’s ponder.

Early this year, a tweet popped up in my timeline wondering who should next join James Corden in that comedian’s Carpool Karaoke. Because I am an enormously funny person, I retweeted the message beneath the words “Ted Kennedy”. Then I had second thoughts. Was this beyond the bounds of decency?

The problem was not that I thought anyone would believe I really wished to see Corden driven to a watery death. The hyperbole is part of the joke. Like many people outside the US, I find Corden’s needy shtick exhausting and sought to express my unease in comic form.

It didn’t seem right to drag Mary Jo Kopechne into a cheap gag. So I took the tweet down

Nor was I worried about staining the reputation of the late senator. He endured much more severe censure after leaving the drowning Mary Jo Kopechne at Chappaquiddick Island in 1969.

What worried me was Kopechne herself. She has family. She was blameless. It didn’t seem right to drag her into a cheap gag. So I took the tweet down.

You know where this is going.

Earlier this week, at a charity gig in LA, Corden got into trouble for making a few breathtakingly unfunny jokes about Harvey Weinstein’s abusive behaviour. The backlash was so severe that Corden was forced to offer a pathetically unsatisfactory apology.

To be clear, sexual assault is no laughing matter. I was not trying to make light of Harvey’s inexcusable behavior, (1/2)

but to shame him, the abuser, not his victims. I am truly sorry for anyone offended, that was never my intention. (2/2)

To be fair, he opened reasonably enough. “I was not trying to make light of Harvey’s inexcusable behaviour, but to shame him,” the tweet began. If you are venturing into this territory then that is the correct line to take. Then he uttered words you never want to hear: “I am truly sorry for anyone offended, that was never my intention.”

It is neither here nor there if you didn’t intend to offend. “I’m sorry if you were offended” sits beside “I’m not a racist, but…” in the bestiary of forbidden weasel words.

Anyway, the incident again kicked up the question of whether certain topics should never become the subject of comedy. It has been asked for as long as humans have been laughing.

Can famine be funny?

In early 2014 The Irish Times reported the possibility (it never came to anything more) of Channel 4 commissioning an Irish writer to deliver a comedy set amid the famine. The subsequent division was intriguing.

The American publication Irish Central, always ready to hit the Bad Brit Alert, launched a campaign to keep the show off the airwaves. Meanwhile at least three columnists in The Irish Times – Una Mullally, historian Diarmaid Ferriter and this writer – expressed the reasonable view that nobody should condemn such a project before seeing the bleeding thing.

Irish Central wasn’t having it. “Why is it okay in Britain to laugh at the Irish famine?” a headline thundered. Here we reach a misunderstanding at the heart of all such blanket prohibitions.

The point is not difficult to grasp. To base a comedy around a tragic subject is not to suggest that subject is funny in itself. The audience’s unease can prompt them to examine untested assumptions. The comedy can expose the perpetrators of evil to deserved ridicule. This didn’t happen to Harvey Weinstein during James Corden’s routine. That was because the jokes were crass, ill-timed and delivered with little sense of respect. Rather than channelling anger, he giggled like a naughty schoolboy. But it will happen to Harvey Weinstein.

Men should speak up, but, for a spell at least, they should leave women to make the jokes

No subject should be off limits to comedy, but, when dealing with sensitive material, the comedian needs to keep any number of considerations in his or her mind. Is my anger directed at the right people? Is my position clear to the audience? Am I the right person to be saying this?

That last point is of particular importance in the Weinstein case. The abuse was directed against women. The abuse helped sustain the systemic misuse of women in the film industry. Men should speak up, but, for a spell at least, they should leave women to make the jokes (or decide jokes are not worth making).

Oh, and I put that tweet up again after the Corden story broke. Then I took it down again.