Vince Vaughn is back with a show of bone-crunching menace

Brawl in Cell Block 99 review: Vaughn has never brooded bigger and badder than he does here 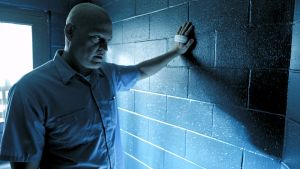 Is there any end to the mighty talents of director, producer, cinematographer, and sometime novelist Steven Craig Zahler? As with his terrific horror-western Bone Tomahawk, Brawl in Cell Block 99 makes space for the film-maker’s ingenious musical compositions, in this instance performed in the medium of endearing cod-Philadelphia soul.

There are many more reasons to be cheerful about this relentless entertainment. Brawl in Cell Block 99 is a comeback and a showcase for the bone-dry delivery of Vince Vaughn, who has never brooded bigger and badder than he does here.

A slow-burning overture introduces Bradley – not Brad – Thomas (Vaughn), a car mechanic who is laid off only to return home (early) and discover that his wife, Lauren (Jennifer Carpenter, a mesmerising mass of nerve endings), is having an affair.

Aggravated, he gets into the best screen fight with a car since Basil Fawlty administered a damn good thrashing to that Austin, before sitting down to talk it out with his missus.

For all its catchy genre beats – Udo Kier as a chilling heavy, Don Johnson as a cigar-chomping, sadistic warden – Brawl takes its sweet time with backstory and motivations. Show, don’t tell, is Zahler’s cinema-friendly mantra.

We spend some time with Bradley as a smart, meticulous, family-oriented drug-runner until a chain of events points him towards the facility of the title. Along the way, there is splendid bone-crunching violence, including the best destruction of a human head since the notorious watermelon-smash effects of Riki-Oh: The Story of Ricky.

Often it feels like we’re rewatching a midnight movie classic ahead of a specialist pub quiz. (What’s the name of the boat Bradley uses? The Lazy Shark!) This is a pastiche subgenre that many have attempted before and almost as many have failed dismally to emulate.

Not here. Brawl is the possibly-ideologically-dodgy punch-’em-up you need to see right now. And take note: the Vaughnaissance is happening, people. Stay tuned for Zahler’s third feature, Dragged Across Concrete, featuring Vaughn and Mel Gibson.