The Death of Stalin: Mortal panic with a ghastly conclusion

Given the mortal terror, Armando Iannucci’s latest political satire is weirdly light on its feet

Official trailer for Armando Iannucci's, The Death of Stalin. 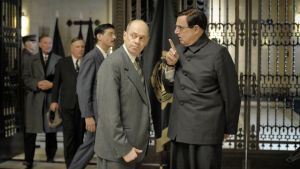 Steve Buscemi and Jeffrey Tambor in The Death of Stalin

Film Title: The Death of Stalin

Is there anything so squishy as a philosophy to Armando Iannucci’s view of the administrative life? Only in the most oblique sense.

In comedies such as The Thick of It (Westminster), Veep (The US vice presidency) and, now, The Death of Stalin (the death of Stalin) the Scottish satirist argues that the urge for survival is the dominant force in political communities. To paraphrase Mike Tyson, everyone has an ideology until they get punched in the face. Iannucci’s satires detail the efforts to avoid getting punched a second time. Or worse.

His second theatrical feature (following the excellent In the Loop) happens upon the most ruthless crucible of political Darwinism. The Death of Stalin, based on a graphic novel by Fabien Nury and Thierry Robin, begins with an absurd episode that clarifies the atmosphere that hangs over Moscow in the postwar years. Paddy Considine plays a senior apparatchik supervising the broadcast of a piano concerto featuring Maria Yudina (Olga Kurylenko). As the last few bars fade, a phone calls comes in from Stalin’s office requesting a recording of the event. None has been made. In a mass panic, the musicians and officials restage the recital and record it as live. But Yudina, whose family have been purged, is reluctant to comply.

Her act of defiance is one of the few moral stances taken in a story characterised by hysteria, duplicity and expediency. Yudina’s actions lead indirectly to (yes) the death of Stalin and the subsequent mad jockeying for position. Once again playing the pompous fool, Jeffrey Tambor oils and quakes as apparent successor Georgy Malenkov. The information and the muscle lies with secret police chief Lavrentiy Beria (Simon Russell Beale). But if we know anything, we know that the man to watch is the craftier, more flexible Nikita Khrushchev (Steve Buscemi).

Iannucci wisely allows the actors to stick with versions of their own accents. So Khrushchev comes across as one of Buscemi’s classic Brooklyn fixers. One can imagine him arguing the price of pickles at the back of a Jewish diner. Beale brings a chilling upper-middle class urbanity to his dispatch of endless citizens for largely imaginary crimes. Paul Whitehouse makes a geezer of Anastas Mikoyan.

One slight exception to the rule is the Liverpudlian Jason Isaacs’ bluff Yorkshire version of the heroic General Zhukov. The tweak is a masterstroke. The man who saved the world from Nazism enters as a no-nonsense bruiser who refuses to entertain the namby-pamby evasions of the panicked post-Stalin court. He could scarcely be from anywhere else but Yorkshire.

The success of Isaacs’ turn does, however, push home the shallowness of the film’s characterisation. For all the intricacies of his dialogue and the complexities of his plotting, Iannucci rarely creates personalities any more nuanced than those in the traditional 1970s sitcom. Each is a cleanly honed cog in a well-oiled mechanism. The noise that machine makes is here more one-note than we have come to expect.

The Death of Stalin starts in a state of mortal panic and continues in that mode towards its inevitably ghastly conclusion. One is left gasping for an ounce of relief or a breath of compassion.

None of that should be seen as serious criticism. At its best the film achieves the relentless pace of the best theatrical farce. Such things thrive on momentum and sag when any concessions are made to audience exhaustion. For something so leaden with annihilation, The Death of Stalin feels weirdly energetic and light on its feet.

A comprehensive rebuttal to those who say comedy cannot be fashioned from the most miserable circumstance.

Joe Dante: You have to give a movie time to age, like wine
6

Love: Roddy Doyle’s masterful study in all that goes unsaid
8