Colin Trevorrow: ‘Be proud of everything you paint, even if Mom doesn’t put it on the fridge’

Director Colin Trevorrow made the jump from micro-budget films to blockbusters. But for his latest, he’s gone back to his indie roots, and the critics aren’t pleased

Trailer for, Book of Henry, a film where a dying boy genius leaves instructions to catch a sexual predator. 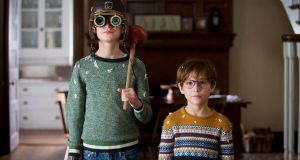 Kids’ stuff: Jaeden Lieberher and Jacob Tremblay in The Book of Henry

Historically, the phrase ‘one and done’ used to refer to those filmmakers who made a stone cold classic – say Charles Laughton’s The Night of the Hunter, Saul Bass’ Phase IV, or Barbara Loden’s Wanda – only to never direct another picture.

These days, the phrase has evolved to cover an elite class of young directors who jump from micro-budgeted indies to $200 million tentpoles. This year, we’ve watched Jordan Vogt-Roberts transition from the cute $1.4 million grossing coming-of-age dramedy, The Kings of Summer, to the in-all-respects-gargantuan $566.2 million grossing Kong: Skull Island.

In 2015, Jon Watts made his feature film debut with the minimalist thriller Cop Car, shot for $800,000 in his Colorado hometown. Next month, his rather costlier sophomore feature, Spider-Man: Homecoming, web-slings into multiplexes with boffo monetary expectations attached.

The ‘one and done’ formula isn’t an equal opportunities assist. Many critics have noted that studios are far less keen to play fairy godmother to women or minorities. (Wonder Woman’s Patty Jenkins is still the only female to have directed a superhero movie in the current studio cycle; Ryan Coogler racked up numerous awards and a $173.6 million hit with Creed before the Marvel Cinematic Universe signed him up to co-write and direct Black Panther.)

Nor is ‘one and done’ infallible. That enviable leg-up has proved enormously frustrating for those filmmakers that are, perhaps, accustomed to a greater degree of control on set.

Josh Trank made his feature debut with the splendid 2012 sci-fi Chronicle, made for a cost of $12 million, before being hired to direct the $125.9 million reboot of Fantastic Four. Rumours of partying, erratic behaviour and studio interference dogged the production.

Trank disavowed the final cut in a Tweet that was quickly deleted. His Golden Raspberry winning Fantastic Four became the worst-reviewed Marvel movie of all time, with a 9 per cent rating on Rotten Tomatoes, and finished with a dismal $168 million global take.

Meanwhile, that same summer, Colin Trevorrow demonstrated the brilliance of the ‘one and done’ system with a four-quadrant sensation. Trevorrow, a former teenage opera star, scored a Netflix hit with Safety Not Guaranteed in 2012. Made for $750,000, the film would catch the eye of Steven Spielberg, who handpicked Trevorrow to direct Jurassic World.

There are no Cinderella stories
“I know when Jurassic World was released that Universal presented it as a Cinderella story,” says Trevorrow. “But there are no Cinderella stories. Before I sold my first screenplay there was ten years of crushing, mind-numbing rejection. That spec script – written when I was 30 – was bought by Dreamworks. So they were aware of me for a while. So there was a phone call. Come in and talk to us and tell us how you feel about Jurassic Park. And a series of meetings. You get your moment. You’re ready. But even after that there’s a huge amount a work and a lot of stumbling along the way.”

Jurassic World would scare up $1.672 billion of business to become the fourth highest grossing movie of all time. Two months into the dinosaur film’s profitable run, Trevorrow was announced as the director of Star Wars Episode IX.

“Directing Jurassic World turned out to be the world’s longest job interview,” says Trevorrow. “In order to get any of these jobs people come observe you in pre-production and in post-production for two years. They watch how you manage people and how you handle the release, and your ability to weather it all.”

And what of the ‘Genius of the System’ as film historian Thomas Schatz calls it? As studios become reliant on fewer and more expensive products, control has tightened to a degree not witnessed since the Golden Age petered out during the mid-1950s.

Just ask Gareth Edwards. Edwards is another ‘one and done’ beneficiary. His first film, Monsters, cost just $500,000; his second was the 2014 reboot of Godzilla, the $529.1 million grossing cornerstone of Legendary Pictures’ MonsterVerse. Last May, when Disney executives reputedly balked upon seeing Edwards’ first cut of Rogue One – his third feature film - the studio drafted in Tony Gilroy to rewrite and oversee reshoots for the standalone Star Wars film.

Gilroy, who wrote several Bourne films and the Oscar-nominated Michael Clayton, was initially paid $200,000 a week to whip the film into shape. His final paycheque - which fell somewhere north of $5 million as the reshoots and rewrites multiplied – prompted many commentators to wonder if the directors chosen to direct tent-poles actually get to direct?

Of course, says Trevorrow: “I know a lot of directors of my own generation – Ava DuVernay and Ryan Coogler - who have come out of Sundance and gone on to direct bigger films. And I feel like all of us have been given tremendous amounts of creative freedom. It’s a tough job. You need to be able to make a lot of decisions and communicate your vision to hundreds of people. So when you look toward an indie director, what you really need to know is if can they order off a Chinese menu for 500 people every day and know all of their allergies for three years.”

An idiosyncratic fable
Trevorrow had his pick of projects between Jurassic World and Star Wars IX, which begins shooting next January for a May 2019 release. To the surprise of many, he opted for The Book of Henry, an idiosyncratic fable about a boy genius (Jaeden Lieberher) who enlists his mom (Naomi Watts) into an elaborate scheme to help the abused teenage girl next door.

“I made this out of a sense of personal responsibility,” says the director. “I don’t only want to make new versions of the things we love. Of course I’m honoured to be able to do that. And I love doing that. But I wanted to make an original film. And this is a very original film. I acknowledge the tonal tightrope it walks. But it was something that definitely spoke to me.”

Trevorrow’s “coming-of-parenthood” story has won both admirers – writing in Empire Magazine, Ian Freer called the film “a rare cinematic treat” – and merciless detractors. The filmmaker has been admirably gallant toward the latter. “Be proud of everything you paint, even if Mom doesn’t put it on the fridge,” he tweeted last Thursday.

“If you’re going to make art you are opening yourself up to intense criticism,” he tells me. “That’s part of the job. And I guess I’m discovering that on this movie more than ever. But I know that’s a result of me taking risks and telling the kind of story that I haven’t seen before.”