Neneh Cherry tries to escape her past in Stockholm

Film review: It’s oppressive but this is a Swedish captor I came to love just a little 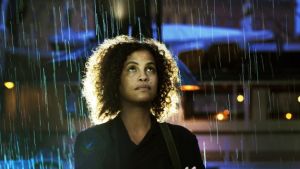 The sinuously voiced Ulster man Mark Cousins – creator of A Story of Film – has, in recent years, moved from movie criticism to a singular school of documentary. Six Desires, his study of DH Lawrence in Sardinia, asked just a little too much indulgence from the audience. I Am Belfast, last year’s study of his home city, was utterly delightful. Cousins’s Stockholm, My Love falls somewhere between. It’s a lovely thing that confirms the author’s good taste and eclectic interests. (This is a film about architecture as much as anything else.) But it’s also frequently infuriating and occasionally a little boring.

Like Patrick Keiller’s untouchable essay films London and Robinson in Space, Stockholm, My Love mixes a little fiction in with its documentary. Indeed, if it weren’t so wilfully lacking in incident you might be tempted to call it a drama. The powerfully voiced Neneh Cherry, born and raised in the city, plays an architect trying to reconcile her conflicted feelings for her father as she wanders around various attractive buildings. A certain degree of ventriloquising is going on. Cherry’s warm, soothing voice is very different to Cousins’s northern timbre, but we encounter the same repetitions that he used throughout his earlier documentaries.

Later she switches to Swedish and discusses her guilty feelings towards a late friend. In the last act, the text appears on screen in a series of elegant titles. Nobody would wish to constrict Cousins’s creative instincts, but Stockholm, My Love is at its best when at its simplest and most conventional. Early on, the great cinematographer Christopher Doyle produces lovely, sedate shots – angled at city squares, following an eye through a keyhole – while Cherry talks us through some Stockholm lore. As the picture progresses, the script is, however, increasingly taken up with vague semi-fictional ephemera.

It was oppressive. But I came to love my captor just a little. They should name a syndrome after that effect.