Transformers The Last Knight: a two-and-a-half-hour flood of raw effluent 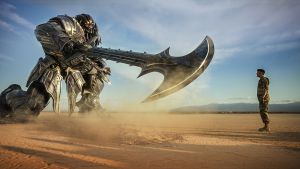 It’s worth reminding yourself that the Transformers films actually exist. Most of the time, Michael Bay’s Unacceptable Face of Capitalism – a poisonously bad thing that makes oodles of cash – is treated as a semi-real critical bogeyman. SuperPerson VI may be awful, but happily it’s not in the Transformers league. I’d rather sit through a Transformers marathon than endure another Harry the Mammoth film. Those sorts of things. It’s a tale to keep baby film reviewers awake at night.

This week we have the real thing back on our screens. The fifth episode offers another two-and-a-half-hour flood of raw effluent. With nothing worse to set beside it, we are forced to admit that it’s as bad as a Transformers film. I’d rather sit through a shorter Transformers film than watch The Last Knight again. I’m sorry. The store of comparisons is empty.

The film begins in mildly promising fashion. That’s to say there seems a chance that it might be merely idiotic, rather than offensive, incoherent and alienating. We are in the England of King Arthur. Setting new standards for moronic exposition, a voiceover tells us that: “Magic does exist. It was found in a crashed alien ship.”

After some jiggery-pokery with a metal dragon – which, sadly, doesn’t turn into a cement mixer – we are pulled forward to Bay’s characteristically sickening version of the present day. Will this film make you feel as if you’ve gone on a chairoplane after drinking a vat of Bailey’s Irish Cream? You’d better believe it.

Now wearing Richard ‘Top Gear’ Hammond’s sad dad haircut (almost certainly a compliment in this context), the character played by Mark Wahlberg is living in the desert with various robots. On another planet, a giant iron lady who wishes us all ill is torturing one of the more famous Transformers. Somewhere in England, Lord Anthony Hopkins of Hamshire (get it?) is prowling his castle and pondering Arthurian legends. All are connected by the search for a magic staff that may help turn combine harvesters into cyborgs.

The film is, as usual, almost impossible to follow if your mind functions as most drugless minds do. One thinks of the sensory overloads that the CIA folded around General Noriega’s compounds. The music is deafening. The dialogue is bellowed. The computer graphics are so dizzying and unreal that the brain struggles to make coherent sense of them. Few shots last longer than 10 seconds. It’s as if Bay and his crew are asymptotically moving towards a perfect montage of still images that stay on the screen for no time at all.

To add to the confusion, the director cares not a whit for geographical logic. Hopkins emerges from a library in Oxford to nauseating edits of bustling Westminster. John Turturro literally phones it in from an unconvincing version of Cuba.

What does seem clear is that Bay’s sexual politics have advanced not a Planck length since the gross rape gags of the disgusting last episode. Laura Haddock, who doesn’t normally look much like Megan Fox, has been styled as Transformers’ early female lead to play a posh English academic called (I’m not making this up) Viviane Wembly.

A name from Austin Powers is the least of her worries. The unfortunate actress is asked to address an Oxford class wearing something that nobody but a pig would refer to as a “stripper’s dress”. Don’t complain to me. Complain to Michael Bay. Those are the actual words that Wahlberg’s character uses. Somebody wrote them down. Somebody (well, Mark Wahlberg obviously) said them out loud before a film crew. Now millions of people will pay to hear them.

There is a reason why the Transformer remains the SI unit of cinematic underperformance. No other film series is so shamelessly wretched on such a grand scale. Few make quite so much money. If they were all washed down the universe’s greatest drain the stench would remain for centuries.

Colum McCann on Israel-Palestine: ‘I was completely ignorant of what was going on’
2

David Baddiel comes to Ennis to meet a Holocaust denier
9

I’d Love To Turn You On review – How David Bowie, the Beatles and others stole from the great composers
10