Borg Vs McEnroe: a smashing match made in heaven 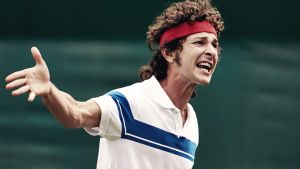 Take a hike, Nadal. There have been other great tennis rivalries and matches, but nothing in the sport’s history can compare with the 1980 Wimbledon final, a ready-made drama in which the coolly efficient Björn Borg faced the volatile American underdog John McEnroe.

Almost every viewer with enough interest to pay for a ticket to Janus Metz Pedersen’s dramatisation of that historic tournament will probably know the winner. It’s a tribute to the director and his two charismatic stars that the film somehow keeps one on the edge of their seat, nonetheless.

As the film opens, Borg (Sverrir Gudnason) is at the height of his tennis powers and entirely imprisoned by his own celebrity. Short interludes indicate a troubled figure with a degree of obsessive-compulsive disorder (he’s disconcerted when his coach picks him up in a car lacking the same upholstery as last year) and a crowding of fans and money-spinning endorsements.

Equally efficient flashbacks depict a kid once known for McEnroe-style outbursts on court. Borg the younger is looked down on by the sport’s authorities due to his humble background and ungentlemanly conduct until kindly Davis Cup coach Lennart Bergelin (Stellan Skarsgård) takes him under his wing. This earlier incarnation is essayed by Björn’s son, Leo, and later by Markus Mossberg.

Across the Atlantic, the young McEnroe is pushed towards overachievement on all fronts by his parents. By the time he (as played by Shia LaBeouf) arrives in London, he has mapped out a path to meet Borg in the final and is being jeered by the tabloids as a “superbrat”.

Interestingly, and perhaps not surprisingly, the film is called Borg in Sweden. LaBeouf’s flair for performance art makes him a perfect choice to re-enact McEnroe’s carefully calibrated shouty shenanigans, but until they meet on court, Swedish screenwriter Ronnie Sandahl’s subtle script is largely trained on his own countryman.

LaBeouf makes McEnroe his own, while costar Sverrir Gudnason does a remarkable approximation of Borg, right down to his walk and hockey-derived backhand. But something odd and rather fantastic happens during the final sequence, when both actors seem to disappear into their respective roles, mirroring how Borg and McEnroe’s tics equally disappeared during that 1980 encounter.

Early on a chat-show host introduces McEnroe and then proceeds to talk about nothing but Borg: “You and Borg are as different as two people can be,” he offers. Others bill the match as Ice Vs Fire. Borg Vs McEnroe cleverly demonstrates that these tennis titans weren’t so different after all.