‘Maze’ review: more like the ‘Great Escape’ than we had any right to expect 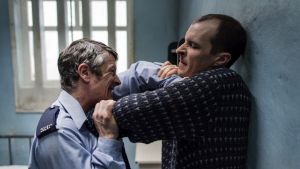 The core relationship is that between Larry Marley (Tom Vaughan-Lawlor), a thoughtful republican prisoner, and Gordon Close (Barry Ward), a stressed guard

It hardly needs to be said that a few unionist politicians have, before seeing the film, already denounced Stephen Burke’s Maze as an insult to this and a misrepresentation of that. There are certainly dangers here. It is sometimes forgotten that a prison officer, stabbed during the Maze prison escape of 1983, subsequently died of a heart attack. It was not just the brave lark of song and fable.

Working from his own tight script, Burke has taken a responsible approach to the material. The core relationship is that between Larry Marley (Tom Vaughan-Lawlor), a thoughtful republican prisoner, and Gordon Close (Barry Ward), a stressed guard.

Marley is gaming Close to gain access to passwords and security loopholes, but, as the film progresses, he guiltily develops a respect for him. We see Gordon defending his family from a terrorist attack on an everyday shopping expedition. He ends up living in a sort of suburban cage. The subsequent violence from the screws is thus reasonably contextualised.

The picture is also sound on the legacy of the hunger strikes. Marley – a genuine figure murdered by the UVF in 1987 – conceives the mass escape as a way of demonstrating that the movement remains unbowed. Meanwhile, he worries about his own son following in his footsteps. Nobody who knows anything about this sorry history would deny that it swells with such personal contradictions.

Here’s the surprise. Although the film-makers have dealt responsibility with the legacy, Maze is at its best when most like John Sturges’s The Great Escape. And it’s more like that film than we had any right to expect.

The reliable Martin McCann – a charmer with flint in his soul – will have particular reason for savouring the Richard Attenborough role. The late British actor and director pushed McCann to the next level when he cast him opposite Shirley MacLaine in Closing the Ring, and McCann repays the debt with a focused turn as the prisoners’ commanding officer. He gets to repeat a key scene from the Sturges film: he is forced to prohibit another escape attempt as he prioritises the mass breakout. Although Close is a braver, more principled man than Werner “the Ferret”, his interactions with Larry suggest those between James Garner and the compliant German guard. The sheer scale of the escape kicks up unavoidable memories of the breakout from Stalag Luft III. (Can there have been a single prisoner unfamiliar with The Great Escape? I doubt it.)

The tension is built up impressively. Vaughan-Lawlor combines raw commitment with a sneaky flexibility to give us an honest man who lies like a master. Ward works hard at allowing only hints of vulnerability to leak through his buffed Ulster carapace. Stephen Rennicks’s sinuous score Krautrocks us back to the early 1980s. Dave Grennan, a hugely experienced camera operator, brings damp menace to every shot of a depressed nation.

Not all the logistics are explained so effectively as we might like. One crucial aspect of the breakout seems to happen as if by magic. Students of the incident may also be disappointed to discover so little about the famously chaotic aftermath. Stories of escapees wandering about the fields and wading through the rivers are still told in the pubs of Ulster. There is much material for dark comedy and wild adventure there.

Still, it would be wrong to criticise the talent for making the film they wanted to make. Burke has chosen to shoot an escape movie and, though a little deadened by its sombre environment, Maze works well on those terms.

The least likely bits are all true. That counts as some sort of recommendation.