The House by the Sea: A family affair that moves between sardonic and sorrowful

Review: Robert Guédiguian and his usual troupe of actors deliver a fine drama 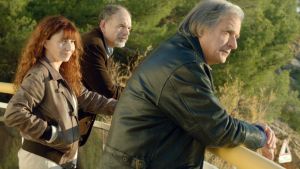 Film Title: The House by the Sea (La Villa)

Marseilles-based director and socialist Robert Guédiguian has been making films with a repertory group, including his wife Ariane Ascaride, Jean-Pierre Darroussin and Gérard Meylan, since 1980, a back catalogue that allows him to use clips from one of his earlier films, Ki lo sa?, to provide flashbacks in The House by the Sea.

Guédiguian’s 19th film as director concerns three middle-aged siblings gathering around their elderly father Maurice (Fred Ulysse), after he suffers a stroke that leaves him in a vegetative state.

Angèle (Ascaride), a famous actor, and son Joseph (Darroussin), a political activist, are returning home from Paris for the first time in years. A third sibling, Armand (Meylan), has never left the village, staying on to assist his father with the family restaurant. Tensions soon arise. Angèle still blames her father for a family tragedy that happened many years before. Joseph’s much younger girlfriend, Berangere (Anaïs Demoustier) is attracted to the handsome Yvan (Yann Trégouët), the son of Maurice’s neighbours, Martin (Jacques Boudet) and Suzanne (Geneviève Mnich), a couple who provide the film with its most moving scene.

Angèle is wooed by local fisherman Benjamin (Robinson Stévenin, another Guédiguian regular). But for all the love and regret in The House by the Sea, there’s a sense of life moving along, regardless. The sleepy Mediterranean village is changing, as signalled by tourist’s taking pictures with their phones, and the third-act discovery of three migrant children.

Guédiguian and his cast’s practised naturalism, a script that moves effortlessly between the sardonic and the sorrowful, and Pierre Milon’s unobtrusive camerawork allows material that might have felt stagey or melodramatic to convince. Even when Joseph is pontificating at the dinner table, the political content is never shrill in a fine drama that shares DNA with the works of Éric Rohmer and Claude Chabrol.