Review: A scathing critique of austerity policies, the film rests on great performances 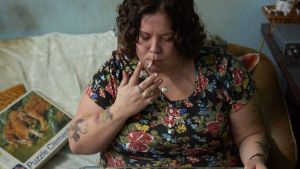 In the mid-1990s, Richard Billingham’s kitchen sink photography took the art world by storm. The sense of confinement around his candid shots of his family home in a Birmingham tower block lent a zoological sensibility to an anthropological, familial project.

Ray & Liz is the culmination of Billingham’s subsequent photographic work and a short film called Ray – the latter was incorporated into this poignant first feature – and it makes for an extraordinary, impactful experience, regardless of one’s knowledge of the Billingham back catalogue.

A miserabilist memoir and a scathing critique of austerity policies, Billingham’s debut feature rests on several, incredible performances. Ella Smith is extraordinary as the tattooed family matriarch Liz, surrounded by jigsaws and dissatisfaction, in a grim two-up, two-down with her older husband and feral children.

Fraught episodes follow, notably when the younger Liz and Ray take 10-year-old Richard (Jacob Tuton) out shopping, leaving their two-year-old youngest son Jason (Callum Slater) with Ray’s mentally challenged brother Lol (Tony Way) and the family’s sadistic lodger Will (Sam Gittins). What follows is as grim as it is white knuckle. Another flashback sees the older children roaming around their estate: every frame is simultaneously free-falling and dangerous. A final sequence sees an elderly Ray (Romer), living alone, staring out the window of his high-rise flat, drinking homebrew donated by a visiting neighbour, and killing time between visits from his ex-wife (Kelly).

It ought to be poverty-tourism or Brum-sploitation. Instead, it’s remarkable, moving depiction of family life that is full of love and anger. For an unflashy, kitchen film, the technical specs are low-key dazzling. Under the Skin cinematographer Daniel Landin, working in 16mm, frames every shot like it requires space in a major gallery. Production designer Beck Rainford chapels each scene with religious icons, ornaments, and the occasional horsefly.

A sometimes gruelling, uncompromising and contrarily beautiful film, it’s an intriguing headspace for both film-maker and viewer.