Ben Hur review: Chariots of dire - not even Jesus can save you 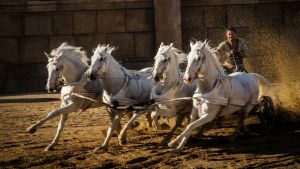 Galloping around in ever-decreasing circles: Jack Huston in Ben Hur

To gaze upon Ben-Hur is to wonder: how in hell did this come to pass? The swords and sandals sub-genre has, on occasion, fluked hits in the form of Gladiator or 300. But these films were fantastically violent: you have to wait around for almost two-hours for Ben-Hur to produce a chariot race, replete with squished competitors, and a few seconds of crucifixion.

For those of you who are unfamiliar with William Wyler’s 1959 epic of the same name – or the 1935 silent version, or the 1907 short, or the 1880 source novel written by an American general – Judah Ben-Hur (Jack Huston) is a Jewish prince who, on suspicion of treason, is separated from his family and condemned to slavery.

His adopted brother Messala (Toby Kebbell), an officer in the Roman Army, might have intervened, but doesn’t. Judah plans for a showy revenge, while his wife Esther (Nazanin Boniadi) preaches pacifism, having fallen in with Jesus (Rodrigo Santoro).

The ending of the film has been tinkered with, so it now resembles a smart-arse kid narrowly winning a football game before taking home to ball while pontificating to beaten rivals: “I’ve come to realise that football is wrong, so I’m retiring undefeated.”

It would be idiotic to criticise Ben-Hur for being a remake, given that the Wyler film is, in fact, a remake. And yet, it proves most unwise to take on a Biblical epic that employed legions - costume designer Elizabeth Haffenden had more than 100 seamstresses at her disposal – to support the Roman legions – some 8000 extras in places – onscreen.

Director Timur Bekmambetov wisely minimises the uncanny valley effect by quickly cutting away from large, obviously fake vistas and by keeping many shots so close it can feel as if the cast are stuck in a caravan.

The filmmaker behind Wanted and Daywatch contracts the 212minutes required by the Wyler film, into a 120-minutes flurry of fast cuts. DOP Oliver Wood (The Bourne Supremacy, Safe House) adds to the squall.

Yet somehow, Ben-Hur 2016 feels longer and duller than its predecessor.

Maybe it’s the casting. Huston is a more capable actor than Charlton Heston: then again, so are most fax machines. But he can’t match Heston for gravelly earnestness.  Kebbell is better, especially in a cast where many contributions – one would hesitate to use the word performances - appear to have fixed up (badly) in post-production.

Brazilian Jesus Santoro often feels like an afterthought, cynically parachuted in as bait for Christian bucks. But at least the cast isn’t exclusively drawn from the Midwest, right?

Love: Roddy Doyle’s masterful study in all that goes unsaid
9