Amy Pascal: ‘Little Women is a rite of passage book for all of us, even now’ 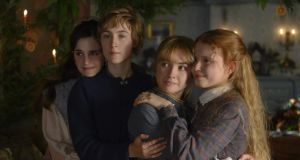 Remember the Spider-Storm? Back in August, as part of this year’s dumbest spell of social-media outrage, Spider-Man fans threatened to “storm” Sony in order to “bring our boy home” to the MCU.

Some 6,200 fans pledged to play a part in the demonstration with a further 66,000 signing a Change.org petition featuring such urgent phrases as: “I cannot in good faith stand by while Spider-Man and his fans around the world become collateral damage”; “Spider-Man in the MCU has brought some of the best moments in modern cinema history”; “Please join me in standing against Sony who I’ll be boycotting until this matter is properly resolved.”

When I started I was just in love with Peter Parker


By late September, the two studios had come to a new and complicated arrangement, one which will allow Marvel Studios to produce a third film in the Spider-Man: Homecoming series and for Tom Holland to appear in a future Marvel Studios film.

The negotiations and terms of the deal are top secret. But we can guess that, somewhere, somehow, Amy Pascal is in the mix.

“I’ll be doing these movies until I die,” says Pascal. “I went to Universal but I still have so many movies at Sony including all of the Spider-Man movies.”

That’s a lot of Spider-Men.

“When I started I was just in love with Peter Parker,” says Pascal. “I had no idea that 20 years later I’d still be saying that. I’m sure that everybody feels the same way about Spider-Man. He’s a human being and his life is not unlike all of our lives. He makes a lot of mistakes and he is looking for love and he’s looking for a pat on the back and to be told what he’s doing is alright. I think that struggle to be good in a difficult world is a very relatable.”

Against all the corporate bluster and talk of studio-storming, Pascal and Marvel Studios president Kevin Feige have known each other a long time and have collaborated and consulted over such important developments as Zendaya’s first audition for Homecoming.

“Kevin and I are so stupid we didn’t even know who she was,” laughs Pascal. “She came in and we’re like: why does she only have one name? And she was so humble and such a good actor. And we had no clue.”

She continues: “Working with Marvel and Kevin is a joy. Kevin was Avi’s (Arad) assistant when we started. I met him when he was getting coffee and not opening his mouth. Then he became the king of the world. And apart from the fact that he talks more, he hasn’t changed one iota.”

Pascal began her career at Columbia Pictures in 1988, where she oversaw Groundhog Day and Awakenings. One of Hollywood’s most experienced executives, she was named co-chair of Sony Pictures in 2006, making her the most senior female in Hollywood. She has subsequently nurtured the Spider-Man franchise, Daniel Craig-era James Bond, and Academy Award contenders such as The Social Network and The Post.

Accordingly, I’m a bit incredulous when she tells me that she has little or no experience as an interviewee.

“I never talk to anybody,” she says. “You’re one of the first. Literally. That’s not why I do this. Nobody wants to talk to the producer. They want to talk to the people that make movies and star in movies.”

It is the eighth film adaptation of the 1868 novel of the same name by Louisa May Alcott and Pascal’s second. She previously helped to develop Gillian Armstrong’s 1994 hit version starring Winona Ryder, Gabriel Byrne, Kirsten Dunst, Claire Danes and Christian Bale.

“I am very excited about it,” says Pascal. “It is a rite of passage book for all of us, even now, 150 years later. And it is one of the only classic novels that is a coming of age story about women and becoming a woman. Here’s the thing. Everybody thinks they know the story of Little Women or they’ve seen the movies. But as you know, when you read the book, it’s a much tougher and funnier and sarcastic book than any of the movies, even the wonderful ones that I’ve worked on and loved so much. The book is different. So that’s what we’ve tried to do this time. To capture how satirical the book is.”

I’m guessing the first woman to head up Sony Pictures Entertainment is firmly on Team Jo?

“Well of course I love Jo but I’ve always had a special affinity for Amy,” says Pascal. “When my mother was pregnant with me, she was living in New York while my dad was getting his PhD, and he would read Little Women to her. That’s why my name is Amy Beth. So this book has been with me forever. Since before I was born.”

Amy Pascal was born in 1958 in Los Angeles to Tony Pascal, an economist at the Rand Corporation who wrote about social inequality and the cost and care of AIDS patients, and Barbara, a librarian. The family were keen moviegoers and frequent patrons of a local repertory cinema where Pascal, from an early age, fell for “the Marx Brothers, Fred Astaire and The Maltese Falcon.”

After graduating from UCLA with a BA in international relations, she went to work for BBC producer Tony Garnett at Kestral Films and from there to 20th Century Fox as VP of production, developing films under Scott Rudin, including Cameron Crowe’s directorial debut, Say Anything.

“I started as a secretary,” recalls Pascal. “I answered an ad in the Hollywood Reporter and I went to work for Tony Garnett, a wonderful producer. I’ve been really lucky to work really great people, like Scott Rudin and many others. That’s the advice I would give to someone coming into the business: stick to it, try not to care what everybody else says, do the work, and work with great people.”

Having joined Columbia Pictures in 1987 as executive VP of production, she worked on such female-oriented pictures as Single White Female and A League of Their Own. The days of similarly themed women’s pictures being confined to a one or two of the four quadrants are finally over, says Pascal.

“With what’s going on in our business, everything is wide open. What I have always done is to make movies that I wanted to see. And when I was running a studio, I was fortunate to work with women, whether it was Penny Marshall or Nora Ephron, Amy Heckerling and Nancy Meyers. And now we have a lot of great women running things. I think movies with female protagonists can be four quadrant movies and the good news about the generation that is my son’s generation is that they will go to movies that are about a girl. They don’t have the same problems and hang-ups of my own generation had.”

You’re always thinking of the next thing


So the current vogue for fairer representation isn’t merely post Me Too window dressing?

“I can say actually [with] 100 per cent certainty that it feels different now,” says Pascal. “I might have had said a couple of years ago that I thought it was baloney. Now studios are recognising that it’s good business to make films that star women and that women have directed. There have been a lot of studies that show – and literally, this is true – if you have a movie where a woman talks more you’ll make more money. If you look to Star Wars or any of big blockbusters, women have a far more dominant role. And I think that’s something we need to take very seriously.”

Pascal was forced to step down as head of Sony Pictures in the wake of the 2015 hacking scandal that saw her private emails leaked. It doesn’t appear to have dented her career. She’ll re-team with Little Women director Gerwig for Barbie, a comedy based on the eponymous impossibly proportioned doll, starring Margot Robbie. Robbie will also headline Marian for Pascal, in a feminised twist on Robin Hood.

“You’re always thinking of the next thing,” says the producer. “You don’t think: ‘Well done, I’ve done this.’ I have a lot of movies that I’m excited about. I love finding stories. I love trying to figure out why I loved it and why somebody else might love it. And when you bring in different departments and aspects, like the music and the marketing, I find all of that incredibly thrilling.”

“There were many things that weren’t to my taste, but that other people who I worked with knew were going to work,” says Pascal. “And I’ve always had a great instinct for the people working with me and when I have to trust them and they are right. The movie that I really wish had done better was Lords of Dogtown. I loved that movie. I loved Heath [Ledger]. If I have to name one thing, that’s the movie that I wish had caught on in a way that I thought it would.”