The 65th outing had Pixar’s Soul, great Irish premieres and a film about cycling cheats 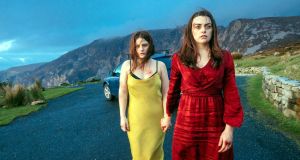 Nika McGuigan and Nora-Jane Noone in Wildfire

Fiona Clark, director of the Cork Film Festival, talks me through her realisation that – like so many arts bashes this year – the event would have to take place entirely online.

“I think we had about an hour and half,” she says. “We launched on the 13th or 14th of October and about an hour and a half later, after announcing our blended festival, we got the news that we would have to go entirely digital.”

Like a number of professionals working on events scheduled for autumn or winter, Clark initially thought her team had dodged a bullet when lockdown hit in early spring. By the time the clocks went back, the crisis would surely be over. As it became clear Covid wasn’t going away so soon after all, they planned for a festival that blended theatrical screenings with online content. The late reorganisation thus proved just that bit less painful.

“I remember thinking: aren’t we lucky to be a festival at the end of the year? I ended up ruing that,” Clark says. “We launched an online film club with our partners the Gate Cinema back in May or June. But we’ve had to plan three festivals this year: the physical, the digital with the physical and then the contingency to pivot entirely digital.”

Clark was adamant that, one way or another, the festival would take place. Quite right, too. Cork Film Festival, now upon its 65th edition, is the oldest major film festival in the nation. Some of the showier films – Oscar hopeful Nomadland and Pixar’s latest, Soul – were unavailable to home viewers but, as Clark explains, the online approach did allow a number of overseas film-makers who might not have made it to Cork to participate in Q&A sessions. A wealth of exciting films that had premiered elsewhere showed up on the menu. Cathy Brady’s Wildfire, a searing drama from the Border counties, and Tomm Moore and Ross Stewart’s Wolfwalkers, the latest, brilliant animation from Cartoon Saloon, made their way from Toronto to the Leeside bash.

Cork opened with The Racer, the latest from experienced director Kieron J Walsh. The picture kicks off with the prologue to the 1998 Tour de France in Ireland and digs into the doping culture of cycling while getting across some sense of the excitement that drives competitors to such ethically compromised lengths. Dom Chabol is convincing as an ageing competitor struggling to keep his place in the team. Iain Glen, never less than convincing, is the trainer who, dispensing injections and blood transfusions, forwards the assumption that this sport is impossible without artificial intervention. At least one younger cyclist disagrees. “I prefer losing clean to winning doped up,” he says. Good luck with that.

The Racer, energised by canny location work, is a powerful exploration of compromised idealism and the unstoppable desire to succeed. The drama is strong. James Mather’s kinetic cinematography – cameras looking down from drones before getting caught up in the action below – is stronger still. Currently, ahem, on the tour des festivals, The Racer is worth chasing after.

Four Irish films had their world premieres at Cork’s online incarnation. Ruth Meehan’s The Bright Side took a brave and ultimately rewardingly approach to the subject of breast cancer. Gemma-Leah Devereux is captivating as a young comedian who grudgingly bonds with fellow chemotherapy patients after being diagnosed with the disease. The film plays a little like a merrier variation on One Flew Over the Cuckoo’s Nest (complete with bus trip), and does a good job of subverting our expectations. It is as warm to the potentially silly middle-class woman (a bit of a staple in Irish cinema) as it is to the older religious lady and the protagonist’s permanently angry contemporary.

Sam Uhlemann’s The Edge of Chaos came close to making the best of an excellent scenario. The family of a corrupt politician – whose familiar election posters do not quite identify a historically successful Irish political party – come together to stage an intervention on Carrie (the consistently superb Aoibhinn McGinnity), a possible alcoholic. Are they just trying to stop her from spilling the beans on dad’s corrupt practices? What is the other deadly secret at the heart of the clan’s unhappiness? Uhlemann, also the writer, teases out his mysteries with skill. A strong cast bounce vigorously against one another. It is a shame the characterisation isn’t a little more convincingly developed.

The hard-working Johnny Gogan came to Cork with Home Is a Sacrifice Zone, a heartfelt documentary on the campaign against the advance of fracking in Co Leitrim – Gogan’s home for some decades. Gogan incorporates attractive animation to songs by Steve Wickham. But, for the most part, this is a rigorous walkthrough of the friendships (and occasional rivalries) at the heart of the Love Leitrim organisation. We learn about parallel discontents on Pennsylvania. We see debates in the Dáil. We even get a call from Mark Ruffalo.

Best of the new Irish films was, however, the fascinating Castro’s Spies. Doing what it says on the cigar box, Ollie Aslin and Gary Lennon’s film goes among those people who spied in the US for the Cuban government over the past four decades. It’s an extraordinary tale that plays a little like a less threatening nod to the TV series The Americans. US observers make the reasonable argument that these operatives, more defensive than offensive, offered no serious threat to the US. Their main job was to warn against any attempt to mount another invasion in the style of the Bay of Pigs.

The trade craft is fascinating. The archive footage of vintage Cuban spy shows adds colour. The stories told are worth cherishing. A fascinating piece of work.