A Winged Victory for the Sullen: ‘There is anxiety all over the world’

Dustin O’Halloran, Adam Wiltzie talk about their music, life and death, and staging their biggest tour yet 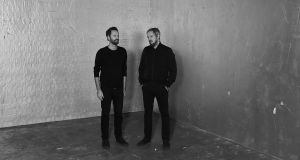 While recording their third studio album, The Undivided Five, A Winged Victory for the Sullen experienced the capricious extremes of life and death. Photograph: Jonatan Gretarsson

While recording their third studio album, The Undivided Five, A Winged Victory for the Sullen experienced the capricious extremes of life and death. ”This record was bookended by two huge events in our lives,” explains Dustin O’Halloran, speaking on Skype from Los Angeles. The other half of this highly acclaimed American ambient duo, Adam Wiltzie, joins us from Brussels. “A really close friend died when we started working on the record. Towards the end of the album cycle, my first child was born.”

Adam and Dustin’s deceased friend was the Icelandic composer Jóhann Jóhannsson. The album’s title is inspired by a group formed by a pioneering Swedish artist called Hilma Af Klimt, who was a mystic, as was WB Yeats, Gustav Mahler, Piet Mondrian and Wassily Kandinsky.  In 1896, Af Klimt founded a ‘Friday group’ called ‘The Five’ with four other like-minded female artists.

“They communed with the other side,” O’Halloran says. “It wasn’t based on Catholicism or anything, but more about the spiritualism of communicating with the unknown. In a lot of ways that is like the magic that happens between Adam and I. Our project becomes something bigger than us. It becomes its own entity with subconscious ideas in tune to universal energies.” O’Halloran and Wiltzie discovered more parallels.

“The Five was also connected to the harmonic fifth, which is sort of the root of our music,” O’Halloran says. “The fifth has become a real fundamental part of our music and sound. We like this idea that The Five were a society and a group that thought in a certain way. I think our music lends itself to being like a big abstract painting in some ways. It is something you can get lost in and doesn’t follow a narrative thread.”

Since their inception in 2011, A Winged Victory for the Sullen have won hearts, minds and ears all over the world. “Over the years the one that always fascinates us is that our music is played in birthing wards,” Adam Wiltzie notes. “When we’re at the merch table, you get these people who usually say that they’ve been having sex to our record. This is not uncommon, but it is really subjective. Everyone has their own story for what it has done for them, but at the same time, you could play it to someone else and they’ll just feel nothing.”

Wiltzie and O’Halloran make a point of meeting fans and listeners at the merchandise table following a concert. “We go out after a show 99 per cent of the time,” Wiltzie says. “That is where you really hear the stories. I want to talk to people. We travel a long way to play these concerts, so I love meeting people at the end. It is a bit of a ritual for me.”

A Winged Victory are slightly taken aback by their global success. “At the end of the day I’m very grateful that people are connecting with our music,” O’Halloran says. “When we made our first record, we didn’t know that people would find it as interesting as we did making it. The music requires a lot of patience, so I’m really touched that with this record people are finding the time to listen to us in an age of such hyper-communication. For example, our record label told us just how many records are coming out every single day. There is this anxiety all over the world about how meaningless everything is, so, if anything, if we are carving out a space where people can escape from that for a little bit, then I’m thankful.”

Prior to becoming a musician, Adam Bryanbaum Wiltzie was a very promising youth tennis player under the tutelage of 1963 Wimbledon champion Chuck McKinley until a knee injury prematurely kiboshed his career at the tender age of 16. Wiltzie has also been involved in other ambient classical projects, namely Stars of the Lid with Brian McBride, who released a stunning double album entitled And Their Refinement of the Decline in 2007, and The Dead Texan with Christina Vantzou in 2004.

Wirtzie also recorded, played, or worked as a sound engineer with Mercury Rev, Iron & Wine, The Flaming Lips and Sparklehorse.  ”I’ve so many great memories of playing in Ireland in particular,” Wiltzie recalls fondly. “I remember back in the mid 90s when I was with Sparklehorse and the very first time we played Whelan’s. I remember Mark Linkous loving Ireland so much because people sang his songs so loud that he didn’t have to sing at all for most of the set. Ireland is also the only place in the world where a customs agent at the airport was so friendly, he ended up coming to the show I played with Stars of the Lid.”

Adam and Dustin’s appreciation of Ireland feeds into recent work. “Lately, we’ve been connecting with a lot of Irish people,” Wiltzie reveals. “We did a video for Aqualung, Motherfucker with Bobby McGlynn from Limerick, who is the prosthetic master who worked on The Vikings television series. We were making a short horror movie with Nikolai Kinski, so I randomly reached out to Bobby. There is something slightly off about Irish people that I find incredible.”

Anyone heading to the Winged Victory shows in the National Concert Hall or St.Rosemary’s Church in Belfast are in for a treat. “Our band has now expanded to eight,” Wiltzie reveals. “We played with a brass section at the 6 Music BBC Proms, but we’ve never toured with one before now. It’s a brand new show with lights and we’re bringing along our own PA. It’s definitely the biggest production we’ve ever done.”

While it is a considerable challenge to put this show on the road, Adam and Dustin wouldn’t have it any other way. “If people can afford to host this travelling circus then we will bring it,” O’Halloran laughs. “Adam and I have always put everything into this. We try not to lose too much money, but we want to do things right and not trim it down just to make an extra buck. We’d rather put on a great show that everybody enjoys.”

People frequently turn to A Winged Victory for the Sullen’s music for unwinding or meditation. ”Everyone needs to turn off, whether that be by meditation, or as Dustin was talking about earlier, taking a break from the madness of this day and age with everyone connected all the time,” Wiltzie says. “For me, it just feels good to turn off my phone. It starts there.”

O’Halloran concurs wholeheartedly. “The artist and the listener are all in this together because the artist can’t exist without the listener,” he says. “We are very grateful that people continue to buy our records and come to our shows. It’s expensive to make and release a record these days, so we’re just lucky that there are enough people out there to enable us.”

The Undivided Five is out now on Ninja Tunes. A Winged Victory for the Sullen play the National Concert Hall on Tuesday, March 3th, and St. Rosemary Church, Belfast on Wednesday, March 4th.

A close friend and associate of A Winged Victory for the Sullen, the Icelandic composer wrote a huge body of work for dance, television, theatre and film. He was twice nominated for an Oscar and won a Golden Globe for his score for The Theory of Everything in 2014. Jóhannsson died in 2018 from an accidental drug overdose combined with medication.

Nils Frahm
The Hamburg born and Berlin based musician, composer and producer is one of the leading lights of modern music, pioneering a unique piano technique incorporating a grand and upright piano merged with synths, drum machines and moogs.

Ólafur Arnalds
Another Icelandic luminary, Arnalds has also dabbled in heavy metal, techno, and hardcore. He featured on an all-star line-up alongside Nils Frahm and A Winged Victory for the Sullen in the Hackney Empire, where they all performed together, and appeared in the National Concert Hall and last year’s Altogether Now.

Hildur Guðnadóttir
Hildur Guðnadóttir became the first solo female winner of a Grammy for best score soundtrack in January for her mesmerising work on Joker. She also scored Chernobyl, and sang on one of the best tracks of 2019, Between Sleiphnir’s Breaths, by the Seattle experimental band Sunn O))).